How the Balkan industries are getting back to business 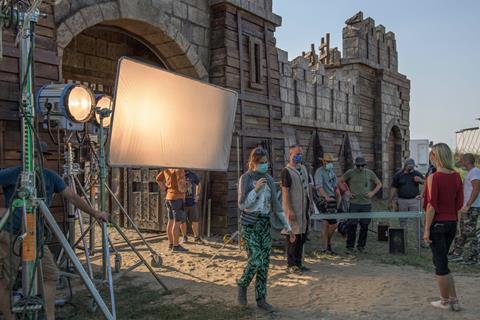 On the Serbian set of The Outpost

Balkan filmmakers are coming up with creative solutions to get and keep productions up and running during the pandemic in the face of very little government support.

In Serbia, the production of TV series, both local and international, is actually booming with some 15 different shows now shooting. One of these is CW’s fantasy series The Outpost, that started filming its third season in Belgrade in January, only to stop on March 13. It restarted on June 4 and is now just days away from a wrap.

“Before we returned to work we planned and prepared a very detailed and thorough anti-Covid plan,” says Jonathan English, head of Belgrade-based Balkanic Media which is servicing the shoot. “Our medical team is run by a doctor who was for 30 years the head of the Belgrade ER ward.”

“The main part of the plan is the podding system where departments are working in isolation from each other. Meetings are held virtually and we try to maintain the highest precautions around the cast. We also try to appeal to everyone in the production to be as responsible and mindful as possible when they are not at work. The entire crew is very aware of their own responsibilities to stay safe and healthy, and we are all extremely grateful to be back at work.”

Similarly, the Belgrade-based production company Firefly, which focuses on high-end regional shows such as mystery thrillers Black Wedding and No Trespassing, as well as The Family, about the final days of the Serbian dictator Slobodan Milošević, is actively filming

“Everybody except actors works in masks, gloves and coveralls, and there is a decontamination zone at the entrance to the set,” says Firefly’s head of content strategy and development Boban Jevtić. “The crews are minimal, and the temperature is taken for everyone. We stopped filming The Family for two weeks as one actor had a fever so we had to wait for test results. Luckily, he did not infect any other members of the team.”

Meanwhile, independent filmmakers such as producer Aljoša Ćeranić who was filming the high-octane thriller Penance, directed by his brother Nemanja, when Covid-19 struck, had to rely on their own resourcefulness. They started shooting on March 15 in their hometown of Indjija. The state government introduced a state of emergency on the same day and the production was forced on to hiatus.

“But as soon as the state of emergency was lifted, we went back to shooting on May 21, and finished it in record 13 days,” says Ćeranić. “We didn’t have a budget for expensive safety equipment, so we kept just the basic crew and used face masks and hand sanitizers. We were extremely cautious and no members of cast or crew got sick.”

Some productions do not depend on large teams, and this is the case with Warm Film, a docu-drama on Yugoslav queer cinema, co-written and co-directed by Nikola Ljuca and journalist and author Dragan Jovićević. The original visual concept of the film required shooting from a distance with strong telephoto lenses, which certainly fit the distancing requirements.

“We have been filming throughout June, but our whole crew and cast is just five people: camera operator, two actors and the two of us” says Ljuca. “We didn’t even need a boom because we used bug mics.”

Meanwhile, in Bosnia, all filming is presently on hold. This includes the new Aida Begić film, A Ballad, a post-apocalyptic love story co-produced by Film House Sarajevo and Les Film de l’Apres Midi. The filmmakers are putting the extra time to good use.

“We were planning to start filming in April 2020, however due to the pandemic we had to cancel our plans and have decided to use this time for further development and funding campaigns until we’re able to set a new filming date,” says producer Adis Djapo.

Acclaimed director Pjer Žalica, whose latest film Focus, Grandma will open the Sarajevo Film Festival, had to cancel the prep period for his next film, May Labour Day, a co-production between Bosnia, Serbia, Croatia, North Macedonia, Montenegro and France.

“We were in the final stages of financing, with prep set for early June, so in a way we were lucky - we hadn’t started spending money yet,” says Žalica. “It was clear already in early stages of the pandemic that movement of people and equipment across borders would be restricted, so we immediately moved the shoot to 2021.”

The country’s funding body, Sarajevo Cinema Fund, which planned to double the production budget in 2020 from the traditional €900,000 it gives out every year, has had to backtrack on this in the wake of the crisis.

“There haven’t been any support measures from the state for the culture sector at all,” says producer Amra Bakšić Čamo of Sarajevo-based Pro.ba. “Our company exists for 20 years and this is the first year ever that we haven’t filmed a single shot.”

The Croatian Audiovisual Centre (HAVC) has been the only government body in the three central Balkan countries to provide extra funding to help productions during the pandemic. It has supported Silvio Miroščinenko’s documentary Obalno Setalište with €8,691, while two features, Goran Dukić’s Nosila Je Rubac Črleni and Eduard Galić’s Sixth Bus, received €42,796 and €17,076, respectively.

“HAVC reacted promptly and their funding helped us get sanitizers, masks and additional vehicles to ensure distancing,” says Nosila Je Rubac Črleni producer Nina Petrović of Zagreb-based Švenk. “Most of our film takes place in exteriors, so that alleviated our situation considerably.”

Croatia has the strongest exhibition scene in the region, and while multiplexes closed when the pandemic started, members of the Independent Cinema Network (ICN), which includes 65 theatres in 54 cities began opening up their venues on May 18, when the country’s public health body published recommendations for measures necessary to hold screenings and other cultural events.

Due to lack of new films, most of the repertoire has been based on re-runs, but some arthouse titles, such as Polish Oscar nominee Corpus Christi or Peter Brosens and Jessica Woodworth’s Toronto title The Barefoot Emperor have also been released, as well as local filmmaker Jure Pavlović’s debut Mater.

Serbian exhibitors have also come up with some creative solutions: MCF, which distributes Fox and Disney titles in the territory and runs a six-screen multiplex in central Belgrade, set up a drive-in at the lake of Ada Ciganlija, a summer hotspot, from June 23. It initially screened classics such as Bladerunner and Superman for free, and a month later they were charging tickets some 10-20% over the regular price for new titles including Ford vs Ferrari, Onwards and Call Of The Wild, but per car not per person.

Now MCF is working with the country’s other cinemas including the biggest multiplex chain in the territory, Cineplexx, on establishing measures with the Belgrade COVID-19 Crisis Headquarters for the restart of regular distribution. The release of Christopher Nolan’s Tenet is set for August 27, and MCF CEO Igor Stanković hopes they can recover at least some of the losses.

“The income from box office that we have lost will probably be in the $10 million range, plus another $20 million from concessions, services and advertising,” says Stanković. “We also need the government to step in with selective measures, such as covering salaries for the employees and cutting the taxes on their income for at least six months and reducing the current 10% VAT on cinema tickets.

In Croatia, the leading multiplex chain Blitz-Cinestar has just announced it will reopen its venues on August 20 with Unhinged, I Still Believe and Brahms: Boy II, the week before Tenet is released on August 27. Safety measures include limiting the capacity of seating and longer breaks between the screenings, in order to avoid crowded lobbies.