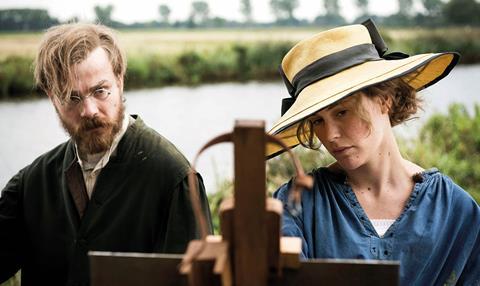 This year’s International Competition is made up entirely of world premieres, while Piazza Grande mixes it up with blockbusters, classics, festival giants and boundary-pushing newcomers

Gemma Arterton, Glenn Close and newcomer Sennia Nanua star in this anticipated dystopian thriller about a scientist, teacher and young girl who embark on a terrifying journey. Scottish director McCarthy transfers his TV pedigree (Peaky Blinders, Sherlock) to the big screen; the BFI, Creative England and Altitude financed the film.

French actor Courcol makes his directing debut (he also wrote the script) with this 1920s-set period drama starring Romain Duris as a trench-warfare veteran living in west Africa to escape his wartime memories, before being drawn back to France. Grégory Gadebois and Céline Sallette co-star. Courcol was Cesar-nominated in 2010 as a co-writer on Philippe Lioret’s Welcome.

The director of classic Hollywood film noirs A Kiss Before Dying (1956) and Crime Of Passion (1957), Oswald returned to Germany to make this 1959 crime drama about a motorcycle-riding beatnik gang. Christian Wolff, Elke Sommer and Gert Fröbe — who played Bond villain Goldfinger — star.

Chilean director Jodorowsky’s latest film debuted in Director’s Fortnight at Cannes, and is an autobiographical portrait of the director as he enters the vibrant artists’ scene of 1940s and ’50s Santiago. The film was part-financed by crowdsourcers Indiegogo and Kickstarter. Jodorowsky’s son, Adan, portrays him in the film.

Clotilde Courau and Sandrine Bonnaire feature in this drama from French film-maker Mention-Schaar, which follows the story of two Parisian teenage girls (Naomi Amarger and Noémie Merlant) who are recruited and radicalised by Islamist extremists.

For his third feature, Malaysian film-maker Said delivers this supernatural noir about a police detective and crime photographer who partner up to solve a series of murders. The film was selected as an It Project at the 2013 edition of the Network of Asian Fantastic Film.

Loach, who was awarded the festival’s Leopard of Honour in 2003, returns with his recent Palme d’Or winner, about a middle-aged carpenter (Dave Johns) and a single mother (Hayley Squires) victimised by the UK’s nightmarish welfare system. The film marks Loach’s latest collaboration with screenwriter Paul Laverty, the director’s go-to screenwriter since 1996’s Carla’s Song.

Marchand’s third outing as a director, co-written with longtime collaborator Dominik Moll, is a thriller about two young French brothers who travel to Sweden to spend the summer with their father, who has cut himself off from the world in an isolated forest. Actress-filmmaker Valérie Donzelli is one of the producers.

Matt Damon returns for a fourth time as Jason Bourne, reuniting with director Greengrass (The Bourne Supremacy, The Bourne Ultimatum) for an action thriller in which the amnesiac assassin uncovers yet more secrets about his past. Alicia Vikander, Vincent Cassel, Riz Ahmed and Tommy Lee Jones join the spy franchise.

Indian film-maker Gowariker returns to Locarno with Bollywood production Mohenjo Daro, a historical epic set in 2016bc about a man who falls in love with the daughter of his enemy. Hrithik Roshan and Pooja Hegde star. Gowariker’s Lagaan: Once Upon A Time In India won the festival’s audience award in 2001.

Nathalie Baye and Emmanuelle Devos lead the cast of this dramatic thriller about a mother obsessed with finding the driver of the Mercedes that hit her son and devastated her life. Mermoud was previously in Locarno’s competition with 2009’s Complices, also starring Devos.

Actress-film-maker Schrader (Deutschland 83) charts the life of Jewish-Austrian writer Stefan Zweig (Josef Hader) during his years in exile from war-wracked Europe. X Filme’s Stefan Arndt produced the film, for which Schrader has a best director nomination from the German Film Awards.

Portuguese director Azevedo’s first film since 2012’s Virgin Margarida is a drama that follows several passengers risking their lives on a train journey across Mozambique, which is in the midst of civil war.

Kim’s disaster movie, which opens in South Korea on August 10, stars Ha Jung-woo (The Chaser) as a car salesman on his way home with his daughter’s birthday cake when the tunnel he is driving through collapses, setting off a huge rescue effort. Kim’s crime thriller The Hard Day played in Directors’ Fortnight at Cannes in 2013.

Belgian film-maker Van Rompaey, who won three awards in Critics’ Week at Cannes for 2008’s Moscow, Belgium, returns with a comedy drama about a suicidal teen (Spencer Bogaert) whose aunt (Alexandra Lamy) is out to save him.

The Apple Of My Eye (Fr) Dir Axelle Ropert

The third feature from French actress-director Ropert follows a blind woman’s relationship with her sighted neighbour. Ropert’s first film, The Wolberg Family, was nominated for the Camera d’Or for best debut feature at Cannes in 2009.

A Japanese man and a Thai prostitute form an unlikely friendship in this drama, which marks a return to Locarno for Tomita. The Japanese film-maker, based in Bangkok since 2014, debuted in competition at the festival in 2011 with Saudade, an intimate look at victims of the global economic crisis in his home town.

This comedy drama about a family of cooks who struggle to keep their independence marks the third time Nasrallah has been up for Locarno’s Golden Leopard, after Mercedes in 1993 and El Medina in 1999. The Egyptian director’s previous film, After The Battle, played in Competition at Cannes in 2012.

Several characters, including a film director and her muse, a renowned novelist, a waitress, an actor and an actress, populate the interwoven stories that make up this Thai feature. The director’s previous titles include Mundane History, which won awards at film festivals including Rotterdam, Transylvania and Golden Horse in 2010.

This feature, based on the correspondence between poets Jorge de Sena and Sophia de Mello Breyner, was produced by 2015 EFP Producer on the Move Joana Ferreira for Lisbon-based outfit C.R.I.M. Productions. The film stars Eva Truffaut, daughter of the late French director Francois Truffaut. Director Gomes’s previous feature, A Woman’s Revenge, played several festivals in 2012 including Rotterdam and Edinburgh.

This love story centres on a short-lived holiday romance that is reignited 30 years later when the couple are reunited. Two of German actress-filmmaker Schanelec’s previous films played in Un Certain Regard at Cannes: Places In Cities in 1998 and Marseille in 2004. The latter starred Maren Eggert, who also stars in The Dreamed Path.

Bulgarian director Petrova’s debut feature tells the story of a nurse who takes care of elderly citizens with dementia, while trafficking their ID cards on the black market. Ivan Nalbantov and Irena Ivanova star. Petrova, who also wrote the screenplay, previously won the European short film prize at Berlin with Rotten Apple in 2007, and was nominated for the Cinefondation prize with By The Grace Of God in 2009.

Argentinian director Pineiro makes his third claim for the Golden Leopard after They All Lie in 2009 and The Princess Of France in 2014. His latest feature reunites him with Agustina Munoz and Maria Villar, who starred in his 2012 hit Viola, and centres on a theatre director who travels from Buenos Aires to New York.

The Idea Of A Lake (Swi-Arg-Qat) Dir Milagros Mumenthaler

Argentinian director Mumenthaler is a Locarno favourite, nominated for the Golden Pardino for short Amancay in 2006 and winning the Golden Leopard, Fipresci prize and Special Mentions by the Ecumenical and Junior juries for 2011 feature debut Back To Stay. His second feature, The Idea Of A Lake, sees a photographer coming to terms with her past.

After making shorts and documentary Deep Love (2013), which won prizes at Krakow and Moscow film festivals, Polish director Matuszynski makes his fiction debut with Last Family, based on the relationship between surrealist painter Zdzislaw Beksinski (Andrzej Seweryn) and his troubled son (Dawid Ogrodnik).

The debut feature from award-winning shorts film-maker and 2004 EFP Shooting Star Koch stars Margarita Breitkreiz as a young Ukrainian woman fighting for a better life in Germany. Koch was nominated for Locarno’s Golden Pardino in 2006, for his short film Beckenrand.

Covi and Frimmel won festival plaudits for their 2009 narrative debut Little Girl (following docs Babooska and Das Ist Alles), and return to the world of the travelling circus for this tale of a lion tamer who has lost his way in life. The film is backed by the Austrian Film Commission.

In 2012, Portuguese film-maker Rodrigues — with co-director Joao Rui Guerra da Mata — competed for the Golden Leopard (and won Locarno’s Swiss critics’ best director award) with The Last Time I Saw Macao. He returns with this solo project, a reinterpretation of the myth of Portuguese religious icon Saint Anthony.

After winning Berlin’s Silver Bear for best director with Aferim! in 2015, the Romanian film-maker is up for his first Golden Leopard with the story of a man suffering from bone tuberculosis who discovers his life in a sanatorium is a place of new discoveries. Set in 1937, the film is a loose adaptation of Max Blecher’s novel of the same name.

French documentary maker Samani turns his hand to narrative for this coming-of-age story about a young man who dreams of life at sea and gets his wish in the form of a rickety cargo ship. Prolific Paris-based Portuguese producer Paulo Branco (Cosmopolis) produces.