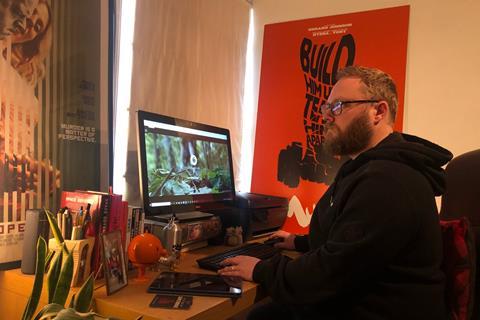 He was recently in Sundance with Romola Garai’s well-received debut feature Amulet. Wilkinson was also nominated for a BIFA for his work on Gerard Johnson’s Muscle.

The first day of filming had begun on Malachi Smyth’s heist film The Score, starring Johnny Flynn, Will Poulter and Naomi Ackie, before the project had to be put on hiatus due to coronavirus and the crew stood down. Wilkinson hopes to get the story of a doomed love affair featuring the original music of Flynn, also a renowned musician, up and running later this year. It is a co-production with Ben Pullen of Sentinel Entertainment.

Wilkinson is also working on financing and casting a number of further feature projects including Carl Tibbett’s noir caper Sweet Dreamers and Ben Parker’s WWII thriller Burial. He is also developing a new horror series for Quibi and Scott Free.

Is it business as usual for you as you work remotely home?
Not ‘business as usual’, as we’re normally working towards a production, and – in these strange times – who knows when productions will be up and running again. But it is safe to say reading scripts, giving notes and watching material are all very much a part of the development phase of a film and TV production company, and it’s a great time now to really hone the slate material or look for new talent.

In terms of my ‘team’, Stigma is just me at present, but I always work with at least one co-producer, so we always have a partner to bounce ideas off.

I’m also talking to casting directors; actors are able to read more now. US agents also seem more ready for their actors to read for lower budget indie films, as these might be quicker on their feet. In terms of financing, the BFI funds still seem to be open, and the broadcasters are still reading. Wider than that, the picture is less clear.

How are you maintaining a working routine?
I’m very much in the office 10-6pm every day. Stigma Films is a home office, so that makes things easy. I live with my wife Jo who also works from home. The routine is similar: I read a script every morning, then go through emails. I usually have a set of notes or some internal piece of admin to deal with early afternoon. I also have calls, video and phone, throughout the day. Bar the meetings not taking place in person, a lot of this routine feels normal.

Which systems are you using to keep in touch with people?
Zoom seems to be the medium of choice for most people.

In what ways are you and your peers keeping up morale?
There are lots of online groups, who are rallying around – trying to share comfort as well as business support. There’s a surprisingly dedicated group of producers who are all talking (weekly) and updating on how we can help each other stay afloat. It was instigated by producer Camille Gatin and there are about 30 of us.

What advice would you give to people in the business who are worried about the future?
Hang on. This won’t last forever. Try and fill your time wisely – and turn to the things that you can do and do well. Also try and diversify how you might bring in income and stop any unnecessary costs. But also be alive to government help, where possible.

What contingency plans are you making for the next few months?
Focusing on script and development. This can be a source of income. Be ready for when productions start to resurface. I used to be a writer and a freelance script editor, so I’ll also see what other work is possible in these spaces too.

What advice do you have for home working?
Just keep your hours. Vary your day. Do work that feels productive, and if you can’t then step away for an hour or so. Reading really helps to break up my days. Or viewing new material. Just make sure that you have aims and you’re able to deliver on them.

What are you watching and reading and listening to to get you through this time?
On the non-work front, we’ve been watching Ozark and Tiger King [on Netflix] I’m trying to finish a pile of books that got started but abandoned for reasons unknown – so it’s more of a completist exercise. Listening to the radio…

What positive change might this bring to the industry?
Better developed scripts, perhaps. Or a chance for good scripts to find a better level of cast or director. If low-budget indies are first out of the gate when we remount, it could be a fertile time for the smaller films to thrive. It’s also brought people closer together – or at the very least reminded people that there’s very little competition in producing. It’s so bloody hard, you really only get support from your peers!