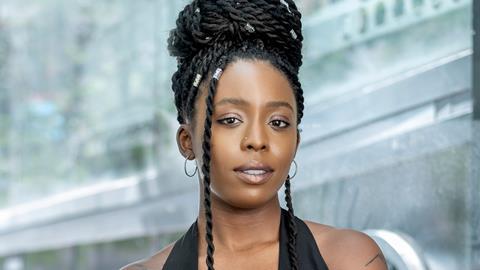 The title refers to a style of reggae popularised in London. It is a first screen role for the actress, who hails from the southeast of the capital. “I think the universe gave it to me for me to understand and remember who I am,” she says. “My late grandfather would always be playing reggae on his massive speakers. That’s in our blood and in our bones; the bass on the floor in our feet.”

McQueen taught St Aubyn to trust her talent, encouraging her to choose costumes for her character Martha. “Even though he may be strong on his vision, he is so open to actors and excited for us to bring something new,” she says. “When we got to the flirty, cute scenes, Steve would fan himself with his script and say, ‘Whoa, let’s do that again!’” says St Aubyn of the moment she knew auditions were going well.

‘Small Axe’ takes in a spectrum of stories. St Aubyn is proud to lead one that “is something different — it celebrates young black love, our culture and our music”.

The Lovers Rock episode opened the 58th New York Film Festival in September. It has presented a game-changing opportunity for its star, who graduated from the Brit School in 2012, before honing her stagecraft on the National Youth Theatre rep course in 2017 through productions such as Othello and Jekyll And Hyde. In 2018, she joined the cast of Harry Potter And The Cursed Child in London’s West End in a ‘swing’ role, which required knowing a lot of the main parts. “The older actors said to me, ‘This is the hardest it will be in terms of theatre.’”

After years of balancing her acting with part-time jobs, St Aubyn is eager to direct all her energies into the former. “I know how driven I am for [acting] means I’m going to appreciate it so much more when it’s entirely my career,” she says.