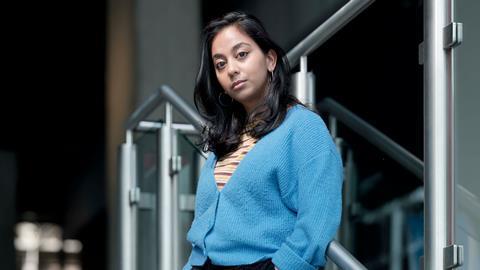 Born in India and raised in Singapore, Anjana Vasan came to the UK to study drama at the Royal Welsh College of Music & Drama in Cardiff. “I think studying drama helped me get out of my head and find a way to be open,” she recalls.

Vasan started working mostly in theatre, with one pivotal 2019 turn as Niru (a rechristened Nora) in A Doll’s House at the Lyric Hammersmith, also booking smaller parts in film (The Children Act, Mogul Mowgli) and TV (Temple, Hang-Ups) before taking the lead role of Amina in fellow 2021 Star of Tomorrow Nida Manzoor’s Channel 4 comedy series We Are Lady Parts, about a punk band formed by young Muslim women.

“It’s so rare that young women, especially women of colour, get to be silly and funny on screen,” says Vasan. “That kind of joy felt radical to me.”

Despite being 34, Vasan found many similarities with her character Amina, the 26-year-old loveable and geeky lead guitarist and PhD student: “She is like a very broad version of myself but she did tap into some of my own personality, like I’ve also been in various bands.”

Off the back of We Are Lady Parts, Vasan was cast in the fourth and final series of Killing Eve. “It’s a different way of working,” she says. “I get different bits of information as we’re filming, and you don’t learn everything at once, so there’s an element of risk there. I’ve been trying to open myself to new ways of working.” She can also be seen in Joe Wright’s Cyrano, a musical drama starring Peter Dinklage and Haley Bennett.

Vasan hopes to keep working across stage and screen — both large and small — in the near future. “I’m a little bit greedy,” she says with a laugh. “I started my career feeling like I wanted to do a lot of classical theatre work, but recently I’ve seen that film and TV can be just as exciting. I’m drawn by new ways of telling stories.”

Don’t count out a move behind the camera either. As a teenager in Singapore, she dabbled with directing and drama coaching. “I want to direct one day,” she says. “But for now, there are a lot more acting roles I want to explore.”