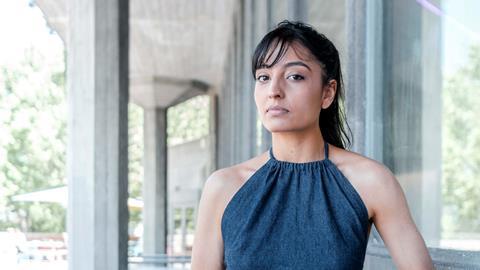 Until she was 13, Ellora Torchia lived a nomadic existence. “I was in a different country every six months — Sri Lanka, Japan, Tunisia, India. Most of my childhood was preoccupied with adapting to new situations and cultures, but I found myself in Sri Lanka when I was nine playing Dorothy in The Wizard Of Oz. I loved it.”

When her family moved back to the UK, Torchia spent two years training to be a boxer, before applying to the Royal Academy of Dramatic Art (RADA) and winning a place on her second attempt. In her final year she landed an agent and then roles in TV shows Indian Summers and Beowulf, despite being told she would be more suitable for theatre. “I was the only brown person in my year, of my origin,” she explains.

After a year at Shakespeare’s Globe theatre, Torchia got itchy feet and headed to Paris to find a French agent, winning roles in Thomas Bidegain’s Les Cowboys (2015) and Patrick Cassir’s Our Happy Holiday (Premières Vacances, 2018). Since then, she has appeared in Ari Aster’s Midsommar, BBC series The Split, HBO/Sky’s The Nevers and enjoyed a co-lead alongside Joel Fry in Ben Wheatley’s eco-chiller In The Earth. “We were chucked in at the deep end,” she recalls. “We didn’t have rehearsals. I wonder whether that was Ben wanting [Joel Fry] and I to get to know each other on the screen.”

Clio Barnard’s Ali & Ava premiered in Directors’ Fortnight at Cannes this year, and also finished are Infiniti — a Canal+ original series in which she plays a space engineer — a supporting turn opposite Gary Oldman in opioid drama Crisis, and one-off Channel 4 drama Cradled. Next up is season seven of ITV’s Grantchester, playing a Mumbai woman who moves to England. Given her mixed ethnicity — her father is Swiss-

Italian, her mother South African-Indian — Torchia has proved difficult to pigeonhole. “In the UK, there’s this idea I’m very Asian, and in the US, I go up for Latino parts,” she says. “Wherever I am, there’s a different approach to who I am.” Torchia sees it as a gift, allowing her to “shift through the norm and find those things that speak to me”.