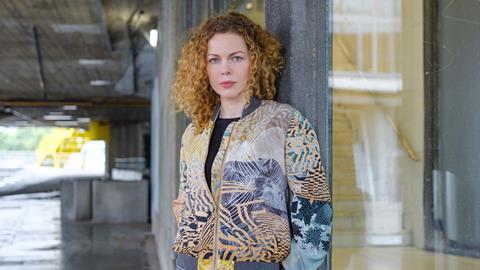 For cinematographer Susanne Salavati, her recent move back into narrative fiction, which includes shooting the likes of Jane Gull’s upcoming feature Love Without Walls and Showtime/BBC episodic drama Back To Life, is like coming full circle.

After completing an art foundation course at Manchester Metropolitan University and a film and TV BA at the London College of Communication (then called London College of Printing), Salavati spent five years working as a spark/floor electrician on feature films such as Attack The Block (2011) and Heartless (2009) — while also lensing short films and Gull’s 2016 feature My Feral Heart — before becoming DoP on long-form documentaries such as Even When I Fall (2017) and White Riot (2019).

Salavati says the time she spent in non-fiction “had a huge influence on my work. It’s a privileged situation where I get to experience other people’s lives, but it’s also very change­able and demanding. So it taught me to push myself.”

That proved particularly helpful on Then Barbara Met Alan, a BBC feature based on the true story of disabled artist activists Barbara Lisicki and Alan Holdsworth, scripted by Jack Thorne and 2021 Star of Tomorrow Genevieve Barr. “It was about thinking logistically and creatively about the best way to capture the world of disability, to show their perspective,” says Salavati. “Barbara and Alan were driven by punk and anarchy, so there was a lot of energy, a lot of movement. It became clear that using a tracking dolly was going to be obstructive, and not in the spirit of the film. We used Steadicam, which gave us the freedom to move around, and we ended up shooting on lots of different formats. You never quite know when you’re in archive or recreated footage, and I’m proud of that.”

With shorts, commercials, film and TV under her belt, Salavati — who is currently filming episodes of 42/Paramount+ romantic comedy Flatshare and prepping Gull’s next film Witch West, and recently shot one-off BBC drama Maryland, co-directed by Lucy Kirkwood and Brian Hill — is keen to do more in the way of dramas and features that speak to her. “I’m always looking to work on projects that I can truly collaborate on, and for it to be about subjects that I care about.”