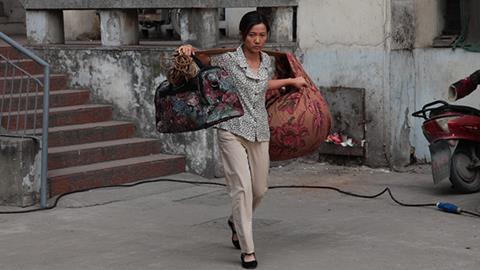 A powerful and absorbing drama driven by a quite wonderful lead performance by Beijing-born actress Yang Bingyan, Feng Shui is a strikingly fine film about the hardships of life. On paper it all sounds less than original, but director Wang Jung has crafted a memorable film that is likely to be picked up for art house distribution and is a shoe-in for festival awards.

The working-class woman who sacrifices all often crops up in Chinese cinema, but Li Baoli is a refreshingly complex character.

The story of a working-class woman and how she deals with the hardships life throws at her – as well as the strident attitude she has to those around her – could so easily have veered into melodrama, but this is gripping family drama at its very best. The film had its world premiere at the Tokyo International Film Festival.

The lead character Li Baoli is a complex, charismatic, tough and aggressive figure, but thankfully Yang Bingyan (who featured in 2009’s Memory Of Love) brilliantly shoulders the film – quite literally in the second half, that sees her working as a market porter, carrying heavy packages on her shoulders – and delivers a wonderfully nuanced performance. Her character veers between sad and vitriolic, but she is never less than watchable.

The film opens delicately in the bedroom, with Ma Xuewu (Jiao Gang) brushing off the attentions of his wife Li Baoli. They are about to move to a new apartment the next day and they have to be up early he says. The next morning the film lays out their relationship.

She is a tough-talking woman who negotiates the moving cost, berates the movers and shouts at her husband and young son. Ma Xuewu’s middle-management job at a factory in Wuhan (this part of the film is set in the 1990s) has secured them the new flat, and Li Baoli’s confrontational manner is based on how she thinks she can control her husband and those around her.

On their first night in the new flat, though, Ma Xuewu announces he wants a divorce. In her own tough-love way she tries to win him round, but is till harsh to him, while she has little time for their son, with her only comments to him asking if he has done his homework.

Ma Xuewu starts to fall for a colleague at the factory, but Li Baoli suspects what he is up to and follows them to a hotel. In anger, she calls the police anonymously and says there is prostitution going on. The upshot is that he falls out of favour at the factory, eventually loses his job and decides to take the only way out he thinks open to him.

The film then switches forward 10 years. During this time Li Baoli has been working as a yoke-bearer porter in the market, using all the money she has to help her son’s education.  But her constant working has driven a wedge between herself and her high-achiever son, and while she feels she is doing everything for him, he harbours anger about his father and as he readies himself to go to university decides he wants nothing more to do with his mother.

The working-class woman who sacrifices all often crops up in Chinese cinema, but Li Baoli is a refreshingly complex character. Beautiful but brittle, hard working but foul-mouthed and unable to see what is happening around her as she single-mindedly rolls up her sleeves and gets on with things. Yang Bingyan is wonderful in the role, making a seamless transition from passionate and angry young mother through to a stoical porter, weighed down by life.

The film’s title comes from comments by her best friend from her home village (a women who has an unhappy marriage with a wealthy man) who says Li Baoli’s new apartment has bad Feng Shui and that “10,000 arrows pierce the heart” of the flat. She blames the apartment – Li Baoli just puts it down to hardness of life.

Screenplay: Wu Nan, based on the novel by Fang Fang