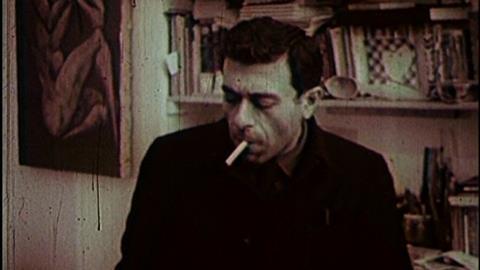 An Iranian artist who disappeared from public life is tracked down in Rome and interviewed in this bareboned documentary. Before Bahman Mohassess dies, Mitra Farahani records the venomous wit in his art and his voice.  A diatribe for personal expression and against the long suppression of it in Tehran, Fifi Howls From Happiness will be a novelty in the Iranian diaspora (and via pirate versions within Iran).

Fifi Howls From Happiness evokes feelings in exile of the liveliness of culture in Tehran decades earlier, without a breath of nostalgia.

Its foul-mouthed curmudgeon gadfly will earn it a place on the festival circuit (everywhere but Iran). The improbable title won’t help much in promoting it, but theatrical potential for the film is so limited that its producers won’t need to worry about fitting its name on a marquee.

The encounter with Mohassess takes place at the end of the artist’s life. Farahani sets up her camera in his Rome hotel room, where he rails against all sorts of things and recites poetry in smoky interviews. When two prominent Iranian artists commission a new painting from the older man, he seems poised for a revival, yet it’s not clear whether he’s prepared to paint again or just talk about it, as he wheezes, shifting between coughing, laughing and grabbing another cigarette. Mohassess dies (aged 79 in July 2010) before he can create that last work.

Farahani’s profile of Mohassess feels long, even at 94 minutes. The justification, no doubt, is that these are, literally, the artist’s last words. Still, the film is anything but solemn, because he isn’t. His sculptures resemble figures by Henry Moore, only more tortured. His paintings pile up figures that could have come from Picasso’s Guernica, or depict faces that seem borrowed from the imagination of Francis Bacon. Fifi, cited in the film’s title, is a picture of a silhouetted figure in red, painted from the shoulders up, with a narrow neck and a head without features. Mohassess never wanted to sell it.

Irreverent and obscene, Mohassess mulls historical events that inspired his paintings, most of them grimacing and grotesque works. He speaks openly about being gay (his taste was for straight boys) and about destroying much of his art that officials in Iran couldn’t destroy first.

Farahani’s only challenge in interviewing Mohassess, once she found him, was to press the camera’s “on” button.  Mohassess isn’t allergic to the attention that he avoided for so many years. The focus narrows when two brothers, Rokni and Ramin Haerizadeh, both Persian artists who decamped to Dubai, learn that Mohassess is alive and commission a new work. After some kibitzing and negotiations over money, the mystery is whether they’ll get it from the man whose medium is now talking about art and himself.

Rudimentary in its interior scenes, with some stunning seaside moments, Fifi Howls From Happiness evokes feelings in exile of the liveliness of culture in Tehran decades earlier, without a breath of nostalgia. The artist even precluded a revival in the market for his work by smashing most of it before leaving for good in 2006. Yet Mohassess the playful curmudgeon turns humane when he quotes poetry – “when the seeds of hatred are scattered, they will inevitably grow.”

A painting, Mohasses says, “shows the unlimited in limited terms.” Waiting for a final act of creation from Mohasses, Farahani ends up meditating on Balzac’s “The Unknown Masterpiece,” another drama of a great painter faced with the dilemma of making another great work of art. Mohassess, not a man of regrets, would still have loved to have been as great as the master painter in that classic novel. Listening to him is evidence of what Iran has lost by silencing or scattering the voices of its culture.