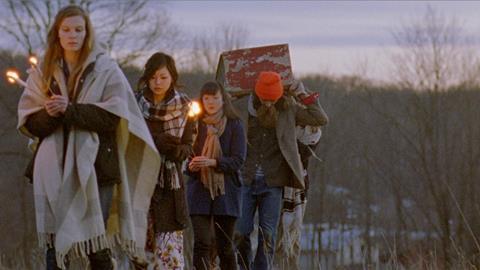 First Winter, set among Brooklynites who take to the hinterlands to practice yoga in pure autonomy, ventures into chilly territory to examine the hardship of being close to nature.

First Winter is best when the camera shifts back and forth in its observation of a starkly gorgeous natural setting and the undignified survivalism.

The immersion in remote group living, which backfires into group starving, is stunning in its cinematography, yet it lacks a script to match its impressive look. Benjamin Dickinson’s feature debut, which premiered at thenTribeca Film Festival, will travel on the festival circuit, but not much farther in theaters than a limited art house release.  It could have a shelf life if its gifted cinematographer, Adam Newport-Berra, moves on to bigger things or if anyone in its no-name cast breaks through.

We join First Winter in the golden glowing light of late autumn, as a group of twenty-ish urban counter culturists practice yoga in a drafty old house somewhere in upstate New York.

We soon see that bearded instructor Paul (played by Paul Manza, a Brooklyn yoga teacher) has an appetite for multiple sexual partners, and that one of the other men has a secret stash of heroin, and that women are competing for Paul’s bed…or bath tub, where he also likes his adventures.

As the temperature drops and the snow falls, power fails and the wood-heated house is freezing. Soon the food supply dwindles, and the rough edges of rivalry among the women chafe uneasily.  After Paul and the pretty Sam (Samantha Jacober) raid the cellar’s canned fruit reserves in a post-coital attack of the munchies, both fall violently sick, and she dies. And the winter has just begun.

Intended or not, First Winter is a jolting reality check on any dream of going back to nature. The house that shelters the urban transplants from the elements becomes a prison, where closeness for the sake of warmth breeds resentment.

Cinematographer Adam Newport-Berra follows the devolution with an extraordinary eye for the outdoor palette’s shift from gold to grey to white, as life indoors becomes a shivering scramble for rice and crumbs. He has the same keen eye for suspicion and distrust in interior close-ups. Production values are high, a triumph given the rural logistics.

First Winter is best when the camera shifts back and forth in its observation of a starkly gorgeous natural setting and the undignified survivalism that couldn’t be farther from the serenity of yoga.

If First Winter succeeds in immersing its characters in the reality of life among the elements, it never gets much farther or deeper. The tone is monotonous, and the script barely exists, so the action unfolds as if what we are watching is a distilled reality show, albeit an extraordinarily elegant one.

This dystopia doesn’t update Lord Of The Flies, nor does take the direction of the frighteningly cultish Martha Marcy May Marlene, despite a cast of young women that the junkie character calls ”yoga sluts” and a long luxuriant beard on yoga teacher Paul that Rasputin or Charles Manson would have envied.

Short-circuiting First Winter’s drama is a fundamental problem — the helplessness of the yoga devotees in the middle of nowhere seems implausible. For the past two years, we have seen militant occupiers  (the same generation as First Winter’s crew) in Manhattan and elsewhere, pitching tents and preparing meals in the most inhospitable of places, where they not only survive, but prove impossible to displace.  It takes more than yoga to stretch this story into something believable.