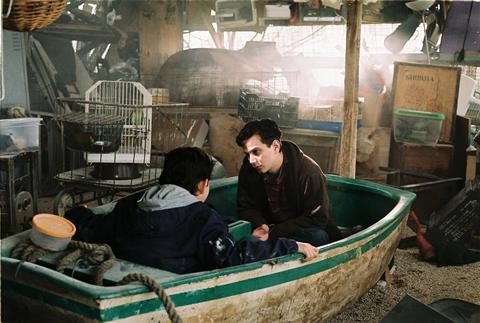 Guy Nattiv, in his first solo flight after directing two earlier features (Strangers, A Matter of Size) in tandem with Erez Tadmor, offers a impressive coming-of-age tale of the kind that fits easily into Berlin’s Generation section, but in this case could just as comfortably filled a more visible slot in the festival’s line-up.

This is the kind of drama that could take place anywhere.

Featuring a solid cast, Flood (Mabool) is a mature treatment of an acute family crisis seen through the eyes of an unusually smart, but physically underdeveloped, 13 year-old named Yoni (Yoav Rotman, in an amazingly perceptive, sensitive and intelligent performance), this is one of the best Israeli films of the year and with the right handling and the profile Ronit Elkabetz, playing the boy’s mother, it should have a fair shot at theatrical distribution and a long life on the smaller screens.

Yoni lives with his parents in a small dormitory town by the sea. His father Gidi (Tzachi Grad) is a pilot flying fertilizer planes and his mother Miri (Elkabetz)runs a nursery for the neighbourhood toddlers. Soon to be 13, the age at which Jewish tradition says boys become men after their Bar Mitzva ceremony,Yoni is constantly taunted by his older classmates for his small stature, high-pitched voice, thin arms and legs.

But neither one of his parents pays sufficient attention to his needs. They are barely talking to each other, both hiding guilty secrets they are desperately trying to conceal. The fragile equilibrium is destroyed when Tomer (Michael Moshonov), Yoni’s older autistic brother, of whose existence nobody knew, has to be brought home after years in a special institution.

Tomer’s hallucinatory presence will force everyone’s hand, indirectly revealing their secrets and leaving them no choice but to deal with themselves and with each other, the best way they can.

Nattiv, who had already tackled the original Noa Berman-Herzberg’s story in a 2002 short film, expands the tale with Berman-Herzberg’s help on the script, and the result is a surprisingly untypical Israeli picture, lacking all the predictable issues one would expect in the circumstances - no politics, no ethnic conflicts, no social struggles, not even religious ones, though there is the option for that, suggested by the gently tentative relationship between Yoni and the surfing daughter of his despairing religion teacher, who is supposed to prepare him for the Bar Mitzva celebration.

This is the kind of drama that could take place anywhere, but all its characters are nicely rounded and solidly anchored in the painstakingly portrayed backdrop of an Israeli small town.

Tightly packaged together and smoothly directed by Nattiv, the picture refrains from caricaturing either kids or adults. Elkabetz, playing a woman who has never really overcome the trauma of having given birth to an autistic child, handles a role which would usually invite hysterics galore with remarkable control, and is complemented by the dependable performance of Tzachi Grad, as her husband, and a reliable but predictably histrionic one by Moshonov as her disturbed son.

However, the show is stolen by Rotman, who manages to convey in the most simple and natural way, without ever setting a foot wrong, all the yearnings and frustrations of growing up and trying to make sense of a world which doesn’t seem to make sense.