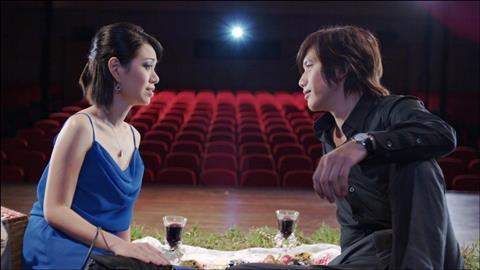 There is a dash of Fatal Attraction — but without the violence and the bunny-boiling — to engaging Singapore rom-com Forever, blessed with a charming lead performance by Joanna Dong as a wedding video-maker obsessed with a hunky Taiwanese music teacher.

The film poses the question whether Joey’s relentless drive to snag the man of her dreams will succeed despite the almost stalker-like behaviour.

The film offers up such a bizarre love triangle that it could have ‘Hollywood remake’ written all over it, but at the same time feels so specific to its Singapore location that it could also bypass overseas attention. But despite the fact films festivals tend to avoid traditional rom-coms, this is a film blessed with genial charm.

Joey (Dong) is a talented video-maker who has created a faux wedding film - starring herself and Gin (Mo), a Taiwanese music teacher working in Singapore - which is screened as the romantic ideal for young singles all over the country.

She works for the Wedding Education Department (WED), responsible for propaganda videos in which staff are told the nation’s marriage index is falling (due mainly to young local celebrities’ reluctance to be wedded), which means funding may be cut and jobs lost. To save the day, Joey’s video is to be shown at the next ‘Romantic Awakening’ singles party.

While shooting her film, Joey falls for Gin — even cringingly calling him ‘Groomie’ when they see each other — and he has to remind her he was acting and is engaged to local rich girl Cecilia (Ng). Furious but still smitten, Joey works her way into Gin’s life, causing no end of problems and even serenading him in the early hours of the morning.

There is the now obligatory ‘bride-to-be trying on wedding dresses scene’, with Gin showing some realisation that Cecilia may not be the one for him, as well as a couple of nicely staged fantasy sequences. The film poses the question whether Joey’s relentless drive to snag the man of her dreams will succeed despite the almost stalker-like behaviour… and given this is a rom-com rather than a drama there can be only one answer.

To be fair, Joey does eventually win over her man through compassion rather than cruelty, and it is to Dong’s credit that she makes Joey slightly crazed but also rather charming.