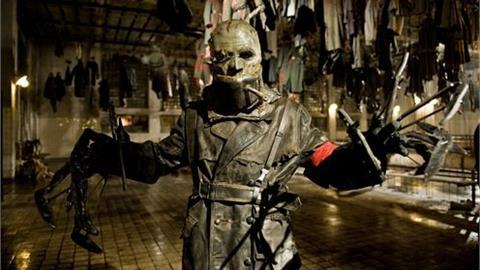 The cheerfully bloody Nazi monster flick Frankenstein’s Army has the gore, guts and gunplay to appeal to genre fans and lovers of war/horror hybrid movies such as Dead Snow or first person shooter games like Return ToCastle Wolfenstein. It takes the rather overused ‘found footage’ notion and follows a propaganda film-maker who is part of aRussian army reconnaissance unit that come across more than they bargained for.

Where Frankenstein’s Army really shines is with the stunning designs and monster make-up, with the film delivering old-style lumbering monsters without resorting to CGI.

Richard Raaphorst’s debut film had its world premiere at International Film Festival Rotterdam – the festival has long been proud of adding a few genre films in amongst the art houses titles – and will have long been on the radar for horror fans who have tracking footage of the impressive creature designs.

Raaphorst had worked for more than 10 years on his Nazi creature feature, initially under the title Worst Case Scenario, eventually co-scripting with Chris W. Mitchell (Süskind) and Miguel Tejada-Flores (Beyond Re-Animator). The end product is a nicely staged wartime horror romp that really only slips into top gear in the climactic and cheerfully gory last half hour as the real horrors are revealed.

The initial set-up is familiar to anyone who has seen a The Blair Witch Style found footage horror film as the Russian camera-man juggles about his camera, jerkily follows the unit in action and shoots footage of them at play. The pre-amble – which goes on perhaps too long – allows a chance to get to know the unit and only hint at horrors to come as they come across odd skeletons, Nazi dead and pick up a broken-up distress call from another unit asking for help.

They eventually come across an abandoned church which has been converted into some sort of laboratory. Worse is to come as they investigate a series of tunnels which happen to be inhabited by deadly – and often amusingly bizarre – creatures that appear to have been created from combining human parts with Nazi weaponry and other paraphernalia.

As the squad gets picked off one by one the only answer for the survivors is make their way to the centre of the lair and confront one Dr Frankenstein (apparently so mad even his own father wanted him put in a mental institution) who is bent on some rather diabolical experiments all in the name of the Third Reich.

Frankenstein is played with wonderfully manic glee by Karel Roden (who, in a nice link, played Grigori Rasputin in Hellboy, where he was engaged in a little supernatural Nazi mayhem) who really comes into his own in the closing scenes. The other roles are nicely played, though this is a film where is no real room for women (which is a slight wrong call by the film-makers) with only Cristina Catalina having a small role as a German medic…only to be soon abused and beaten.

Where Frankenstein’s Army really shines is with the stunning designs and monster make-up, with the film delivering old-style lumbering monsters without resorting to CGI. The creatures revel in names such as The Crypt Monster, Mosquito, Protobot and Machete Zombot, and while clad partially in Nazi uniforms their limbs have been replaced by shears, machetes, drills and claws, and in one case the head has been replaced by an airplane propeller.

It seems likely that Frankenstein’s Army will be a fixture at horror and genre festivals around the world, but it also has style and sense of humour (some of the climactic scenes are rich in black and bloody humour) to be picked up for distribution, though likely on home entertainment in those territories (certainly the US and UK) who favour such product.