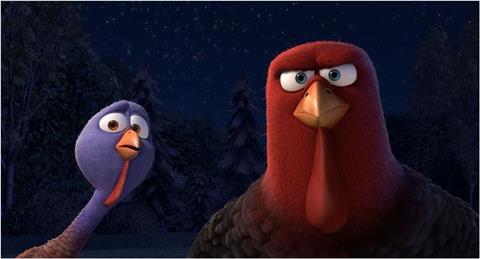 Colourful but rather bland, Free Birds is a smartly animated though rather unmemorable tale of two turkey who take a trip back in time to try and prevent future generations becoming the national dish of Thanksgiving. But the kiddie animation market is a pretty forgiving one, and while Thanksgiving is very much a North American event it is a film that will find audience if screens are starved of other animated fare.

Time-travel romps are familiar filmic fare – and there are some familiar time twists in this family-friendly film – but there is something engagingly daffy about misfit turkey Reggie (voiced by Owen Wilson), who has dodged the fate of many of his feathered turkey friends after being chosen as the year’s ‘pardoned turkey’ by the US President (a long tradition apparently) now lives the high-life at Camp David.

But his easy life is torn apart when he is kidnapped by tough Jake  (Woody Harrelson) who takes them off in an egg-shaped time machine back to 1621 as the Plymouth Colony settlers get ready for their first feast, with turkey on the menu.

The mis-matched pair – with Reggie finally seeing the light in terms of what happens to turkeys – set about trying to rally the pacifist turkeys into fighting back, even planning a raid on the settlers’ weapons supply. There are more than a few gags; a romantic interlude as Reggie romances Jenny (Amy Poehler, daughter of the turkey chief), and a dash of good-natured action, but in the end – despite the high profile voice casting – it never has the wit or style compared to that other ‘poultry-fight-back’ film, Chicken Run.

There is a more than uncomfortable subtext that links turkeys to America’s brutally mistreated Native American Indians, which leaves a sour taste in the mouth, while the film also (rather foolishly) posits the notion that fast food is better than fresh poultry…perhaps it would have been more sensible to have taken a vegetarian option.

Naturally enough, though, much of those niggles will be lost on the film’s target audience, with Free Birds offering enough 3D animated fun to keep youngsters amused and engaged.