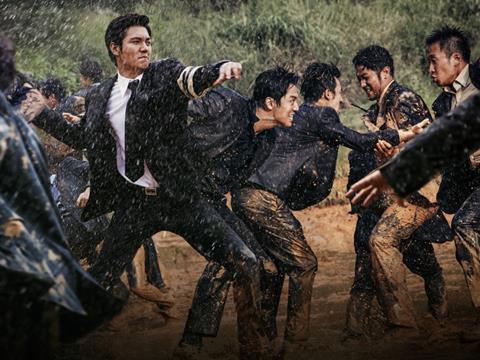 Marking something of a return to form, Yoo Ha’s gangster film about two close friends who get separated and join different gangs is set against a fascinating backdrop as one of Seoul’s most affluent districts Gangnam – now famous following Psy’s hit single Gangnam Style – is being drawn out amidst much corruption in the real estate market during the 1970s.

On a technical level, this is Yoo’s most accomplished film to date with a number of outstanding set-pieces using an array of camera angles and locations while masterfully exploiting lighting, colour and choreography giving it a rich noir touch.

At times, its scope is perhaps overly ambitious inevitably making it heavy going for some. However, much like Yoo’s classic A Dirty Carnival, this film is set to stand the test of time owing to Yoo’s captivating craftsmanship that will demand subsequent viewings. Beautifully shot and choreographed it captures the era in glorious fashion – also aided by an excellent 1970s soundtrack that includes Filipino folk-singer Freddie Aguilar’s song Anak that was released in the late ‘70s.

Locally, the film took a respectable $5.5 million for an R or 18 rated film on its opening weekend (Jan 23-25) and has currently accumulated $8.3 million since its release on January 21. This is likely to be attributed to a number of factors including the casting of superstar Lee Min-ho alongside Kim Rae-won together with its compelling backdrop, which is part of an ongoing trend in Korean films, television and music to go back in time.

Going forward, its success will depend on how viewers react to its dark tone. Internationally, meanwhile, Lee Min-ho’s starring presence will be its strongest selling point, especially in Asia where he’s immensely popular, while fans of Yoo and Korean gangster films will also be intrigued by this bold and stylistic feature as it hits various territories in the coming days and weeks.

The film’s two central characters are childhood friends Jong-dae (Lee Min-ho) and Yong-gi (Kim Rae-won) who struggle as orphans to make ends meet. They are then separated once they get involved in a political skirmish after their shanty home is demolished. Three years later, Yong-gi is now working in a criminal organisation, the Myeongdong-pa while Jong-dae is still living with a former gang leader Kil-su (Jung Jin-young) and his daughter Seon-hye (Kim Seol-hyun), but also ends up in another gang after Kil-su is unable to repay his debt, and seeks to help and find another way of earning money.

Ultimately, as those in high places meddle in real estate as the price of land is set to rise (this particular piece of land they are after is now known as Gangnam, which literally means south of the (Han) River that runs through Seoul); the two friends are caught in a web of corruption, but on opposing sides making their friendship increasingly precarious.

When it comes to gangster films, Yoo again demonstrates his expertise at orchestrating such a feature following a departure into other genres such as the erotic period film A Frozen Flower and thriller Howling where he failed to make the same impact. Akin to Once Upon a Time in High School – the first film in his noir “street trilogy” that includes A Dirty Carnival, and concludes with this feature - Yoo grounds his latest film in a social and political context always provoking further thought with references to the social system, almost poking fun at it all, which is emphasized in the film’s poignant final scene.

On a technical level, this is Yoo’s most accomplished film to date with a number of outstanding set-pieces using an array of camera angles and locations while masterfully exploiting lighting, colour and choreography giving it a rich noir touch.

This film features two stars, but it’s Lee Min-ho who leaves the lasting impression despite him being the less experienced of the two – it’s his first leading role in a film. Successfully shaking off his persona as someone used to playing attractive and wealthy young men in Korean television dramas, he’s certainly one to look out for given how he’s embraced this challenging role.

Gangnam Blues is not without its problems though. There is little room for supporting roles to be fully developed, with the exception of the character Kil-su, and it’s also a little uneven in places. Some may also struggle with its overarching scope and bleak tone, but regardless of its faults, it certainly doesn’t disappoint. Fans of Yoo and Korean gangster fare should therefore welcome his latest triumph.