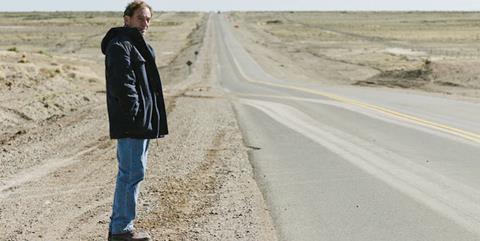 The road to redemption is marked by friendly encounters and vague, unarticulated regrets in Gone Fishing (Dias de Pesca), a plaintive character study from veteran Bombon: El Perro writer/director Carlos Sorin. The slow-burning tale is as modest and unassuming as it central character. There is a degree of gentle charm in his peregrinations, but the film is too slight and understated to connect with a significant theatrical audience. Further Festival screenings seem a more likely prospect.

Alejandro Awada has an innate warmth that makes Marco a sympathetic characters and someone worthy of our compassion.

Alejandro Awada brings a restrained, sad-eyed soulfulness to his role as Marco Tucci, a man on the road to the coastal areas around Patagonia where his intention is to catch a shark. On the road, he encounters boxing coach Oscar, backpacking youths in a seaside cave, a fisherman and a kindly hotel manager.

He happily surrenders himself to the kindness of strangers. In snatches of conversation, we discover that Marco is a recovering alcoholic and is looking to re-establish contact with Ana (Victoria Almeida), a daughter that he has not seen in a number of years. We subsequently discover he also has a fair talent as an opera singer.

The initial encounter between father and daughter seems amicable enough as Ana introduces him to her husband and the grandson that he has never met. It becomes clear that Ana still harbours a gnawing sense of resentment over his past transgressions although it is entirely typical of the film that we learn very little of the details.

Carlos Sorin has developed a signature style of storytelling in which very little is made explicit. We are left to infer and speculate from a gesture or a remark. He also believes in the virtues of naturalistic performances.

Alejandro Awada has an innate warmth that makes Marco a sympathetic characters and someone worthy of our compassion. He gives the impression of having being humbled by life and is a reserved and apologetic figure. We can only guess the kind of soul-searching and effort required of him to embark on such a significant quest.

The film unfolds in unfamiliar locations along the Patagonian coastline and employs a collection of non-professional actors in support of the leading performers. The combination is seamless and enhances the flavour and texture of a small scale but poignant film.