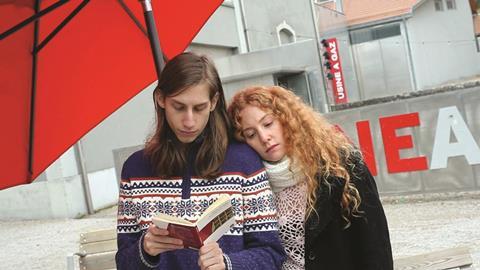 Initially it seems like a conceptual joke to imagine as rarefied an auteur as Jean-Luc Godard working with as commercial a medium as 3-D. Then you remember that Godard, along with Antonioni, was a pioneer in turning from celluloid to video and electronic media in the 1970s, and Goodbye To Language (Adieu au Langage) begins to make perfect sense - if the term ‘perfect sense’ means anything in this context.

More of a jigsaw than Film Socialisme, the new film again whole-heartedly fries our senses both with image and disconnected sound.

Following up his recent contribution to the 3-D portmanteau 3X3D, Goodbye To Language follows in the eye-searing, mind-spinning wake of Godard’s recent features, taking the fragmentation even further than in his Film Socialisme. Godard’s current style being utterly sui generis, there’s little point debating whether this film is in any conventional sense ‘better’ or ‘worse’ than his recent work. It’s certainly as fascinating as it is confusing, and wherever Godard is treasured - on the art and academic circuits, as well as in the cinema world proper - Goodbye To Language will be eagerly welcomed, as long as the proper projection facilities and goggles are available.

More of a jigsaw than Film Socialisme, the new film again whole-heartedly fries our senses both with image and disconnected sound, the violently intense use of colour furthering the experiments with extreme chromaticism that kicked in with Eloge de l’Amour (2001).

Narrative has, once again, become merely an effect, or the impression of an effect, with Godard’s actors more like models (“I hate characters,” one of them remarks), with sporadic quasi-narrative moments involving a man and a married woman having an affair, arguing and philosophising in the buff, while one of the rare incidents hinted at involves a man being shot near a water trough. The film gestures at the idea of ‘chapters’ - entitled ‘Nature’ and ‘Metaphor’ - although these titles recur and the film doesn’t really break down in any clear way.

But the film certainly muses on the question of nature, with Godard’s lyrical and bucolic strains represented by the wanderings of a dog named Roxy (credited as ‘Roxy Miéville’, so presumably belonging to JLG and his partner Anne-Marie Miéville) through forests and by a lakeside.

So what does Godard do with 3-D that, say, James Cameron would never think of? He shows us a naked woman holding out a bowl of fruit, for example but he also adopts more radical strategies. The roughness and high-intensity colour of the images sometimes cause the screen to sparkle like crystal. At a couple of other moments, Godard breaks down the solid-seeming illusion of the image, in a disconcerting and rather magical effect that has the image break down into two, one veering off from the other before the two perplexingly join together again.

As for text here, it’s as dense and often as philosophically cryptic as ever, with the usual amount of wordplay and scabrous humour thrown in - for example, when the woman’s lover explains why Rodin’s ‘Thinker’ is the image of equality, while taking a dump naked. The literary allusions come thick and fast - with science fiction writers Clifford Simak and A.E. Van Vogt joining the usual likes of Dostoevsky and Flaubert. Science fiction seems somehow fitting for what you might call Godard’s anti-Avatar.