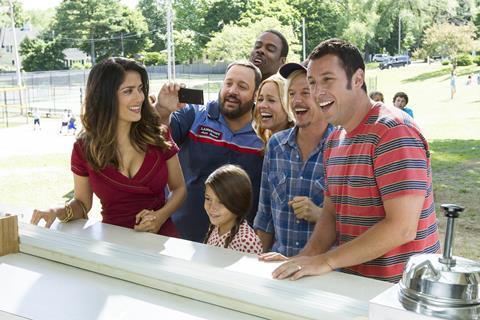 At some point, someone in a position of authority will tell Adam Sandler no, or at least ask to read a screenplay. Until then, there will exist a good chance of further unchecked hyper-indulgences like the punishingly unfunny Grown Ups 2, which opens with a sequence in which a deer urinates all over the face of his character (a stand-in for viewers, perhaps?) and goes only downhill from there. A thick, indolent haze of self-satisfaction hung over 2010’s Grown Ups, a fratty comedy of arrested development, but all the worst qualities of that movie are multiplied and amplified in this phoned-in abomination, which asks audiences to pay for and identify with a ceaseless stream of self-involved mugging.

For a bit, since there isn’t an honest character moment in the movie and one’s brain is free to wander, a thinking person might entertain the notion that Grown Ups 2 is in fact a demented parody of comedies of parenthood and mid-life crisis.

Trading largely on the intrigue of its assembled cast of mostly ex-Saturday Night Live comedy colleagues, the original film beat back deadly critical notices en route to a $162 million Stateside haul against a $271 million overall theatrical gross. The cratered domestic returns of Sandler’s last two live-action movies ($74 and $37 million, respectively) have to be a concern to distributor Sony, though, and with both much funnier laffers like The Heat exhibiting staying power and other buzzy entries on the summer horizon, audiences may not feel obliged to return for an encore offering of something to which they had a lukewarm connection in the first place. Justifiably brutal critical reaction and similar word-of-mouth may conspire to produce another summer bomb, which in turn could inspire a bit of much-needed discipline and refocus from Sandler.

Grown Ups 2 takes place over the course of a single June day the summer following the events of the first film, which brought together a group of high school friends for the funeral of their basketball coach. For reasons scarcely explained, hotshot Hollywood talent agent Lenny Feder (Sandler) has now retired and moved his wife Roxanne (Salma Hayek) and their kids back to his small New England hometown. There, he hangs out with fellow family men Eric (Kevin James) and Kurt (Chris Rock), as well as womanizer Marcus (David Spade), who welcomes into the fold a son (Alexander Ludwig) he’s never met. (Noticeably absent from proceedings is Rob Schneider, one of the gang the first go-round.) As their teenage and pre-teen children experience the last day of the school year, the men find themselves in conflict with a group of frat guys (led by Taylor Lautner and Milo Ventimiglia).

If comedy lives in the wide shot, returning director Dennis Dugan and editor Tom Costain are serial killers, delivering an endless catalogue of discretely framed reaction shots and putative visual punchlines — the equivalent of insistent nudges to the ribs. It’s distracting, and tiresome.

There’s an old bully (Steve Austin) Lenny dutifully triumphs over but the script, as it were, is basically nothing more than a lazy series of slapstick bits and randomly arranged encounters, rounded out with some jocular ribbing and “burp-snarts,” which combines three bodily functions. Gaps in logic abound (Marcus’ son arrives on a cross-country bus trip early enough in the morning to attend the last day of school, to name but one), many the result of the stupefying decision to condense the action to a period of less than 24 hours.

For a bit, since there isn’t an honest character moment in the movie and one’s brain is free to wander, a thinking person might entertain the notion that Grown Ups 2 is in fact a demented parody of comedies of parenthood and mid-life crisis. After all, it includes comedically hyper-aggressive frat guys, a fundraising car wash sequence that aims to lampoon prurient interests, and a climax in which the aforementioned preppies square off in a battle royale with hundreds of “townies.” The film’s otherwise achingly earnest tone upends this interpretation, however. Grown Ups 2 doesn’t have a subversive bone in its body; it’s just awful.

True to his presently complacent nature, Sandler again finds an excuse to shun collared shirts (for him, intense costuming is a pair of jeans, to round out a Bruce Springsteen outfit), and his performance likewise bears all the marks of a contented “Everyman” movie star, wherein he and his group of longtime filmmaking buddies get to show up, hang out and just kind of make things up on the fly.

To paraphrase a previous, much funnier Sandler film: “What you’ve just given us is one of the most insanely idiotic things I have ever seen. At no point in your rambling, incoherent efforts were you even close to anything that could be considered genuine comedy. Everyone in this room is now dumber for having watched it. I award you no points, and may God have mercy on your souls.”