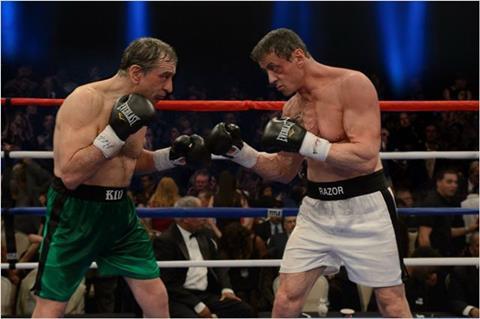 Putting Robert De Niro and Sylvester Stallone - the onetime Raging Bull and the sometime Rocky - in a story about old boxing rivals is a fun idea. But the moderately funny and half-heartedly dramatic Grudge Match is only a passable vehicle for the pairing, a lightweight comedy that will need to make the most of its somewhat dimmed star power - and a diverse supporting cast - if it wants to score many points at the post-Christmas box office.

The climactic fight sequence doesn’t begin to compare to anything in Raging Bull or the Rocky films but it is reasonably convincing and fairly emotionally satisfying.

A wide US opening on Christmas Day will put the film up against some strong competition, though worldwide distributor Warner Bros may still be able to attract an older-skewing audience as the holiday season winds down. Stallone, whose recent releases have over-performed outside the US, will be the bigger draw when the film has its international roll out in the New Year.

As portrayed in a digitally enhanced opening sequence, Pittsburgh fighters Billy ‘The Kid’ McDonnen (De Niro) and Henry ‘Razor’ Sharp (Stallone) were fierce rivals in the eighties until the latter’s sudden and unexplained retirement from boxing. Thirty years on, the spotlight-shunning but financially strapped Razor finally agrees to a re-match with the brash, womanising Kid.

While the sluggers try to get back in shape, the film introduces other characters that link the two men: the fast-talking son of their original promoter (played by comedian Kevin Hart, from Think Like A Man), Razor’s crotchety old trainer (Alan Arkin), Kid’s long lost adult son (The Walking Dead’s Jon Bernthal) and Razor’s long estranged girlfriend (Kim Basinger).

Director Peter Segal (Get Smart) steers the film efficiently enough through its early, mostly comedic stages, with De Niro and Stallone doing an amusing grumpy-old-boxers double act and Frank and Arkin producing some funny moments of their own.

The slightly more serious scenes later in the story reveal some uncertain acting and weak dialogue. Making her first big screen appearance for more than three years, Basinger gets stuck with a particularly thin role.

Not surprisingly, the climactic fight sequence doesn’t begin to compare to anything in Raging Bull or the Rocky films but it is reasonably convincing and fairly emotionally satisfying.