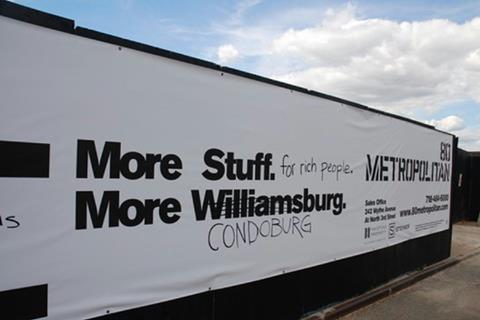 Friedrich’s no-budget home movie about being forced out of her home by demolition development hits at a place where many in the US public have been. The diatribe will rally indignant audiences at film festivals and at a release in New York and a few other cities.  It won’t go beyond art houses in the US - much of its potential public is likely to be downloading information about likeminded economic victims for free.

With its public-access aesthetic and its smirking defeatism, Gut Renovation lacks the earnest confidence and motivational kitsch of most protest docs.

In a voice-over that makes Michael Moore and Morgan Spurlock seem subtle, Friedrich surveys the collapse of her neighborhood, Williamsburg, building by building, as new apartment-clones multiply in what had been a working class and bohemian district. By the end of the film, 173 of those buildings are torn down. And that was 2010. After that urban clear-cutting, Friedrich rechristens Williamsburg as Condoburg.

What looks like a stealth tour of real estate rape – with the camera at hip or knee level – is a film of declamation, with the angry auteur confronting the “rich,” as she calls the interlopers – “welcome to the neighborhood, you’re ruining it” - and commiserating with neighbors who are exiled as speculators buy their buildings and rents triple.

Gut Renovation is a film about ugliness. Williamsburg was never much to look at, but the wrecking ball and bulldozers create instant ruins, and the structures that replace them are plainly faceless in their urban anonymity. Friedrich’s camera in her one-woman documentary ranges through the rubble as a pacifist might walk through a battlefield, deploring the carnage around her, and failing to get the aggressors to stop. The relentless construction noise makes you glad the film isn’t longer. The hellish din feels like guerrilla sensurround, with painful high frequencies widening the spectrum.

There’s humuor in Friedrich’s despair, as the soundtrack samples accompaniments to the destruction – from tragic to silly, and sillier. Auld Lang Syne resurfaces as five years go by, in a recurring German version to an annoying Jews-harp accompaniment, in a Latin dance beat, and in a reggae groove, each representing elements of the urban mosaic that are being lost with each new over-priced condo lease. Blaring rock and roll pessimism is like writing graffiti on the walls – “artists used to live here” - the last gasp of protest before the defeated pioneers who created the neighborhood decamp.

There are villains in this farewell – politicians, greedy property speculators, and new residents seeking a “cool” place to live. Friedrich brings them to us only in drive-by (or walk-by) encounters. She isn’t looking for editorial balance here. The shredded landscape attests to the balance of power, and shows who’s winning.

With its public-access aesthetic and its smirking defeatism, Gut Renovation lacks the earnest confidence and motivational kitsch of most protest docs. There’s no celebrity narrator – celebrities don’t get thrown out of their homes, and this film probably won’t make Friedrich one. But the doc is scrutinizing an ongoing crisis that American television largely ignores. Its grim lesson: Williamsburg just became unaffordable for the creative people who made it livable.