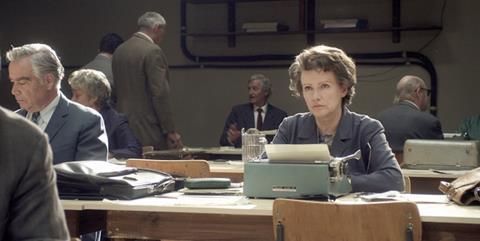 Great thinkers, and Hannah Arendt was one of the most influential but also controversial in the 20th century, rarely provide the best material for cinematic adaptation. Thinking, in itself, is not particularly photogenic, and their biographies, even if most eventful, once deprived of the full impetus of the thought process which made them famous tend to lose much of their interest.

Arendt, who never has even one moment of doubt about anything, comes through almost as brilliant but also as rigid and arrogant as she is accused of being by her adversaries.

This may explain why Margarethe von Trotta’s attempt to deal with Arendt on both levels, philosophical and personal, in one film, while neatly academic and obviously well researched, feels more like a learned, well-documented lecture . Its earnest, thoughtful and well-intentioned approach, though, in dealing with one of the most relevant themes of our times, the essence of evil, is too stiff and didactic for a normal film audience but never goes far enough for the  philosophically inclined.

Arendt (played far too respectfully by Barbara Sukova) scandalised the entire Jewish establishment when she covered the Eichmann trial in Jerusalem and came up with her famous “banality of evil” definition, which was considered by many of her virulent critics as an attempt to clear the man in charge of the “Final Solution” of his responsibility.

Her answer to these accusations comes in the final eight minutes soliloquy, when she explains that she never meant to exorcise the demon because all she saw at the trial was just a mousy, bespectacled bureaucrat in a glass cage who was constantly arguing he had never touched a Jew and was just obeying orders. In her opinion, as a philosopher, Eichmann’s guilt was first and foremost the abdication of his right to think, and as such, it applies not only to Eichmann in person but to anyone, who at any time, in any place, acts in the same manner, whether in the past, present or future.

The film covers three years in Arendt’s life, 1961 to 1964, between her assignment to cover the trial for the New Yorker and the publication of the series of articles which instead of just reporting the trial, turned into one of the most momentous but also much discussed publications on morals in the second half of the last century.

But in a roundabout way, von Trotta covers considerably more grounds. The introduction of several flashbacks documents her relations with Martin Heidegger, a pillar of German philosophy, infamous after he joined the Nazi party, and the heavily charged dialogue, which resound every once in a while as brief lectures, spell out in detail much of Arendt’s past and relations.

Factually, there is not much one could reproach the script. It includes Arendt’s relationships with other intellectuals of German origin who like her, to emigrated to US, Her quasi-perfect marriage To Heinrich Blucher (Axel Milberg); her friendship with American author Mary McCarthy (Janet McTeer); her conflict with her close friend Kurt Blumenfeld  (Michael Degen), who even on his deathbed couldn’t forgive her for what she had written, and the controversy around her New Yorker articles and the hate wave following them.

It also stresses the fact that some of the most rabid attacks on her were based not on her actual writings but from people who had never read her New Yorker pieces but only heard the media reports.Most important of all, it includes moving authentic footage from the Eichmann trial, chosen to support Arendt’s theory that the trial was not just about Eichmann but about the Holocaust as a whole.

Arendt, who never has even one moment of doubt about anything, comes through almost as brilliant but also as rigid and arrogant as she is accused of being by her adversaries. The other parts never develop a clearly defined identity of their own and while the entire film offers a pretty correct and accurate historical portrait, it fails to generate much more than an intellectual interest in a subject, which, rightly enough, deserves to be explored.