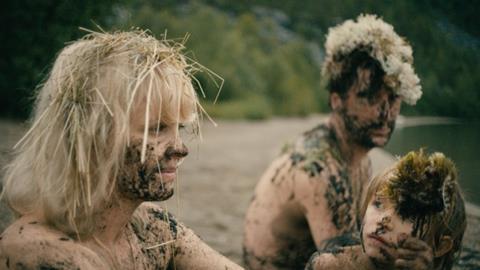 Not just a German comedy; a German comedy about depression. Sonja Heiss’s delicate, funny, surprising second feature navigates the same waters as edgy comedy-dramas like 50/50 or Declaration Of War, but it’s less formulaic than the former and less manic than the latter. The intriguing tonal jolts of the first act settle down by the end to something a little more conventional; but superlative performances from the two leads and an intriguing switchback game of sympathies keep our attention, and the film’s resolute avoidance of melodrama is refreshing given the subject.

The graceful photography of cinematographer von Graevenitz continues to find beauty and light in the darkest moments.

Its unclassifiable, curio status will perhaps limit the film’s prospects outside of Germany, where it will be released by Pandora, but the Norwegian co-production could open some doors in Nordic territories and one or two adventurous distributors elsewhere may be persuaded to take a punt on what is, apart from anything else, a well-made package, down to the soundtrack by (among others) Berlin-based pianist Lambert.

Jaunty vibraphone music plays and even jauntier credits roll as we first meet happy-go-lucky Hedi (Tonke) riding to work on her bike; at this point, if the film hadn’t premiered in the edgy Forum sidebar at Berlin, we’d be bracing for canned laughter.  Hedi is clearly a bit of a flake, so it’s no surprise when she gets stuck in the lift at work (and tries to get the life story of the service guy over the intercom) or has Tati-esque problems with partition walls and photocopiers. But we soon see that at home, she’s a caring mother to post-toddler Finn (Nitsche) and a loving wife to hubby Uli (Low). However, the hyper edge we’d already detected soon spills over into a serious panic attack, just when the couple are making love. Before long the fizz has gone out of Hedi, the panic has turned to depression, and the comedy of the intro has deflated into something darker – without ever quite abandoning a healthy sense of the absurd.

Tonke is excellent as a woman felled by an ailment she never saw coming, and the script explores issues often sidestepped in films about the black dog of depression – such as the selfishness, or perceived selfishness, of the sufferer. On the fringes of the story at first, the slightly stand-offish Uli is gradually fleshed out: a speaking signer, he works as an assistant with the deaf, but had been planning to move to Gambia with the whole family to work for an NGO. He puts his plans on hold and buckles down to support Hedi and care for Finn, but gradually her unresponsiveness starts to wear him down and shift our allegiances.

However, a lovely, quietly hilarious scene in a pet shop where Hedi, high on tranquilisers, buys a rabbit for her son, shifts them back again and leads us to question the cooling or our own feelings for her: isn’t the ‘pull yourself together’ impulse we guiltily feel – as voiced in one scene by Hedi’s bossy mother – exactly one of the mechanisms in the spiral of depression?

The graceful photography of cinematographer von Graevenitz, whose previous credits include Miranda July’s The Future, continues to find beauty and light in the darkest moments, but also suggests the disjunct between ‘normal’ and ‘depressed’ vision – something also driven home by sound design (heightened traffic noises, or none at all), costumes (the mustard top and flowery top Hedi wears when she returns, prematurely, to work) and a continual play on windows, apertures, cages and aquariums.