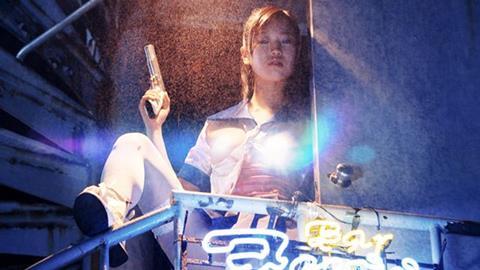 Takashi Ishii’s often uncomfortably perverse and exploitative film is a bizarre blend of voyeuristic sexuality and rather brutal violence that trades on fantasy and objectification, and while an easy fit on the genre festival circuit it is unlikely to have much of a theatrical release life outside its home territory. The film screened at the Fantasia Film Festival in Montreal.

While the production design is terrific and the violence nicely staged, at times the eroticism and rather perverse sexuality can appear heavy-handed and exploitative.

The core of the film is the relationship the lead character’s relationship with an extremely lifelike and sexy female mannequin, which veers from sexual to protective, though when they first ‘meet’ he is rather obsessed as to whether the mannequin has a ‘vagina’…though given this is a Japanese film the region is naturally blurred out in the film.

Kentaro (Tasuku Emto) is a down-on-his-luck book editor who is chosen by his manager to accept the company’s problems, and finds himself demoted to office supply manager, losing his fellow editor girlfriend along the way. He drunkenly gets into a fight, and to escape stumbles into a warehouse where he comes across the beautiful life-size mannequin (Kokone Sasaki) -  naturally dressed in schoolgirl attire - and starts pawing her.

Before long he finds himself under attack again from the drugs gang that have taken over the warehouse, but luckily she comes to life and is on hand to tackle the bad guys…with the ‘blurring’ there to cover her dignity, which is handy given that Kentaro removed her undergarments during his ‘exploration’ of her. Naturally Kentaro takes her home, sleeps with her and tend her – she offers acceptance of his love as well as protection and solace for a lonely and rather lost young man.