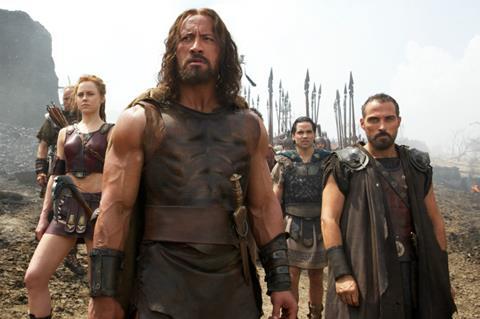 Smartly Brett Ratner leaves the ‘Gods do battle’ stylings of Clash Of The Titans and Immortals to one side in favour of an amusing, exciting and entertaining fantasy romp that sees a bearded Dwayne Johnson lead a ‘rag-tag band of warriors’ into battle. Hercules may well only be receiving it first screenings to media a few days before its release date, but it is a stylishly made – if rather familiar – action-adventure that will keep fans of swords-and-sandals films more than happy.

Hercules is blessed with a real sense of epic scale and delivers plenty of rather engagingly old-fashioned fantasy action-adventure.

Rather than dipping into mythology – though the film amusingly plays on that concept in its opening scenes – this version of the story is based on the Radical Comics Hercules by Steve Moore, which deconstructs the legend and offers up the story of a man born with the strength of a god and who uses mythology as a way of scaring his enemies.

Opening in a busy summer for action films, with the latest Transformers and Planet Of The Apes films still showing a certain muscle and the latest Marvel franchise Guardians Of The Galaxy soon to be released, Hercules will rely on a strong opening to power its way to box office domination. That being said, Dwayne Johnson has strong international appeal and it likely the film will be a strong summer performer at the worldwide box office, especially since apart from one use of the ‘F-word’ it favours comic book violence over Conan-style blood and mayhem.

A strong support cast – made up largely of Brits, in the form of Ian McShane, Rufus Sewell, Peter Mullan, John Hurt and Joseph Fiennes – help give the film a certain gravitas, with McShane and Sewell especially dab hands at the more wry and amusing dialogue, leaving Johnson to glower, flex his not-inconsiderable muscles and slay multitudes with sweeps of his club.

The film opens with a voiceover detailing the history of Hercules – born the son of Zeus to a mortal mother and who grew into a powerful Demi-God famous for his larger-than-life exploits, including the famous “12 Labours”, the most harrowing and terrifying tasks in all of ancient Greece. But as the story develops it turns out the voiceover is being delivered by Hercules’ cousin and storyteller Iolaus (Reece Ritchie), who happens to be in the hands of a villainous band of pirates.

It turns out that Hercules leads a band of mercenaries, all blessed with various fighting skills, who trade on his supposed Demi-God status to scare opposition and increase the amount paid to them. After sorting out those pesky pirates he and his loyal followers are recruited to try and end a bloody civil war in the land of Thrace and return Lord Cotys (John Hurt) to the throne. But as Hercules and his fellow mercenaries use their skills to train troops and win the war they come to suspect they may be being manipulated.

This variation on Hercules sees him as a very real human warrior, haunted by his past and given solace by his warrior friends and mercenary skills. It is easy to see why Dwayne Johnson was such an easy fit for the role – looking a magnificently muscular as always, he downplays his usual self-deprecating humour and plays the role pretty straight, allowing other around him to provide the laughs. As usual he dominates the film, but there is plenty of room around the edges for others to make an impact. He does, though, get the biggest laugh in the film when expresses his less than warm feelings towards centaurs.

Ian McShane, as spear-wielding soothsayer Amphiaraus is amusing and gently profound as a man convinced he cannot die, while Rufus Sewell is perfect as the world-weary Autolycus, a friend of Hercules since they were children and full of smart sarcasm. Also impressive is Norwegian actress Ingrid Bolsø Berdal as Amazonian archer Atalanta, perhaps the most impressive fighting machine of the whole band.

Brett Ratner has some fun with the film’s 3-D effects and keeps the action moving at a smart old pace, delivering some nicely epic battle scenes as the newly trained Thracian army fights off the snarling rebels. The battle sequences are brutal without being overly bloody and Rattner resists heading into super-stylised, slo-mo, 300 type fights, preferring to keep the sense of scale, speed of action and physical intensity.

Hercules is blessed with a real sense of epic scale and delivers plenty of rather engagingly old-fashioned fantasy action-adventure. It may well be no action classic and certainly lacks the sheer directorial grace or visceral mayhem of films like Gladiator or 300, but it is an impressive piece of mainstream entertainment. Plus Dwayne Johnson is always worth watching!