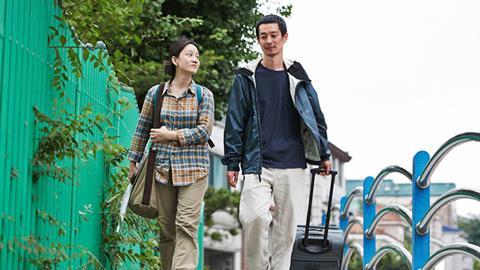 Hill Of Freedom (Jayueui onduk) is another capriccio by South Korea’s maverick filmmaker Hong Sang-soo. His fans will probably adore it, think it cute and original, the rest of the audience will sigh again in resignation and wonder whether this game of cinema riddles does have anything significant to say behind its smiling, insouciant wrapping.

More concerned about the playful structure of his film than about the plot itself, Hong has no more to offer than a flimsy story peopled by likeable but sketchy characters, about ideal love versus everyday romance.

The general idea here is to see what would happen if a drunken film editor would scramble the footage he is entrusted and put it together in the wrong order, what it will do to the characters in the film and to the spectators in the cinema. In Hong’s version, the plot follows a series of letters a young Korean woman receives from her ardent Japanese suitor. But then, out of sheer excitement, she drops the package on the staircase and the pages fly all over the place, she collects them at random, without paying attention to the sequence, starts reading again and Hong goes on telling the story in the now reshuffled, arbitrary order she had put the pages together.

The original story should go like this: Kwon (Seo Younghwa), a language school instructor, returns from summer holidays and finds a package of letters left for her by Mori (Ryo Kase), whom she met a couple of years earlier, when he was employed by the same institute. From the letters she learns he is back in Korea, looking for her, and he had been around all summer long, waiting for her to come back. He has moved into a room at a boarding house next door to her flat and he goes there every morning to check whether she is back. In his letters to her he not only expresses his fears that she may not want him at all, but also describes, in the manner of a diary, everything else he has been doing while she was away.

The letters, partly narrated on the soundtrack but mostly re-enacted, reveal Mori frequented a bar next door named ‘The Hill Of Freedom’ (so don’t go imagining there is any talk about hills or freedom here, this is just a red herring), where the friendly bar lady Youngsun (Moon Sori), shows a keen interest in him after he found her small dog who had been lost, and they end by having an affair, though Mori’s letters mention how contrite he felt about it all. The letters also mention another person staying at the same boarding house, Sangwon (Kim Euisung), a swarthy Korean in whose company Mori has more than a few drinks, while wondering plaintively aloud whether he is not wasting his time for no good reason.

All this is told, of course, in a jumbled manner, the audience often learning about the effect of an action before they have even known it has taken place. For instance, Mori’s reference to the bad character of Youngsun’s present boyfriend comes in before Mori has had a chance to meet this person, not to mention that when the ending comes, there is still a sequence following it, related to an earlier event.

More concerned about the playful structure of his film than about the plot itself, Hong has no more to offer than a flimsy story peopled by likeable but sketchy characters, about ideal love versus everyday romance. The entire script is based on a long series of dialogue (Hong’s personal Rohmer hang-up), packed, among other things, with innuendoes about the Korean temper and its macho oriented society. The images are meticulously framed, mostly in medium shot, and since Mori, a Japanese, does not speak Korean, all his conversations with the rest of the cast have to be in English. A clever device indeed.

Barely more than an hour long, Hill Of Freedom may well face the risk of being discarded as too short for a normal cinema slot. But then, maybe the best way to market it is not as a film but as a kind of video game, where viewers are required to re-arrange the various sequences until a logical, linear plot comes to light.