Holidays By The Sea 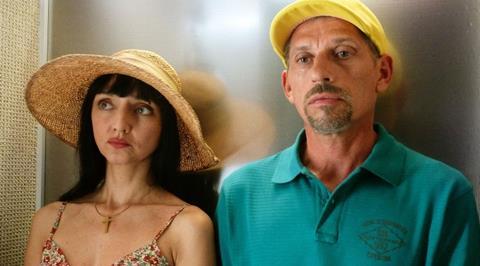 This deadpan comedy by Pascal Rabate, a highly respected French comic book author, is intended not so much as a tribute to silent movies but rather to the old time burlesque. Somewhat in the spirit of such earlier French luminaries as Jacques Tati and Pierre Etaix, Rabate does not use even one line of dialogue, but this multi-plot yarn about having - or not having - fun at the beach will have a hard time matching the success of Rabate’s previous Les Petits Ruisseaux which turned out to be a surprise hit last summer.

The large cast does its best to keep a straight face throughout and compensate for the lack of dialogue with facial expressions that unsurprisingly tend to be over the top.

Though it does have its moments every once in a while, his latest effort is neither funny nor inventive enough to travel much, but may be particular enough to rate slots on the festival scene. Holidays By The Sea (Ni a vendre, ni a louer) screened in competiton at the Karlovy Vary Film Festival.

The film looks to dwell on intertwined variations on the theme of love at the beach. They concern an overweight retired couple (Catherine Hosmalin, Charles Schneider) in their mini-cabin who finally discover a way to dispel their middleclass boredom; a salesman (David Salles) falling prey to an ingenious S&M hooker who leaves him handcuffed to a hotel bed and drives away in his car; a concerned father (Dominique Pinon) whose two young daughters are taken to the beach by a couple of art students; a woman (Maria de Medeiros) whose crucifix necklace takes off on the kite of a man (Jacques Gamblin) and they both end up chasing it into a nudist colony while their respective partners are energetically copulating back in their hotel room; a family setting up its tent in the sand with the perfect discipline of  a paratroop platoon; a couple of punk pickpockets (Gustave Martin and filmmaker Gustave de Kervern, whose brand of humor can be easily traced here) who have fun on the golf course and then stuff themselves in a parody of La Grande Bouffe; the owner of supermarket going out of business who draws his own price bars on the few products still left in his shop, and a funeral making its way in and out of the proceedings from beginning to end.

The large cast does its best to keep a straight face throughout and compensate for the lack of dialogue with facial expressions that unsurprisingly tend to be over the top. Some of the situations, such as the midnight storm which turns all the holiday caravans upside down, are mildly amusing, while others are rather predictable (such as the nudist colony) and still others are going on long after they had worn out their welcome (the undertaker’s hiccup) or are left without a real punch line (the manacled salesman), not to mention that at some points a line or tow of dialogue would have saved the situation. Refraining from talking could be bliss in some cases – Palfy’s Hukkle or recent Cannes hit The Artist are great examples - but to work, it has to look natural and unforced, which is not the case here.

However, given the thin veil of nostalgia which seems to spread over the entire film, generated mostly by the semi-abandoned village in which it takes place, probably the best way to see it is as a tribute to old fashioned, far more human and simple pleasures of a holiday in the sun by the sea, the kind that has been practically wiped out by the frenetic pace of our age. For some, it will be a fond remembrance.