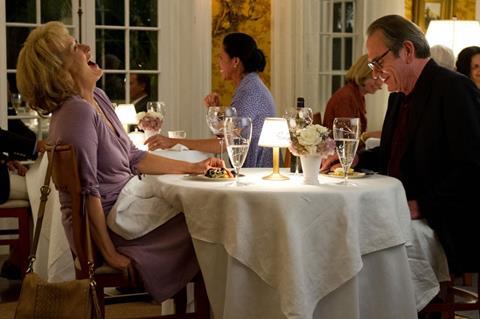 With Meryl Streep and Tommy Lee Jones in terrific form as a quietly unhappy late middle age couple, Hope Springs is an odd but often very effective mix of mainstream romantic comedy and surprisingly hard-hitting - for a summer studio release - romantic drama. Though it won’t be easy to market, the film could strike a chord with the older demographic that has recently shown a willingness to turn out for relevant material featuring prestigious talent.

While both leads make excellent use of their ample screen time, Jones is particularly impressive as the distant yet regretful Arnold.

When it opens the Mandate Pictures production wide in North America on Aug 8, domestic distributor Sony will be looking to reach the female-led audience that has made summer successes out of the likes of The Best Exotic Marigold Hotel and Streep’s (and Sony’s) Julie & Julia.

Independents that have bought the film from Lionsgate for international territories may take their own marketing approaches but they will certainly benefit from the pulling power of the two leads and co-star Steve Carell.

Television writer Vanessa Taylor (Gideon’s Crossing) wrote the script, which focusses almost exclusively on Streep’s Kay, a wife and mother trying to rediscover the spark that her decades-old marriage has lost, and Jones’ Arnold, a dour accountant who sleeps alone and pays more attention to the golf channel than his spouse.

Kay persuades Arnold to go for a week of intensive counselling from a marriage therapist (Carell) in the picturesque town of Great Hope Springs and the sessions force the couple to confront the state of their relationship.

The movingly intimate scenes in the therapist’s office include some refreshingly frank talk about love and sex and the talk leads in turn to a handful of sequences (none of them very explicit) in which Arnold and Kay make awkward attempts to rediscover their sex life.

Director David Frankel, who previously steered Streep in The Devil Wears Prada, never settles on a single mood, allowing the tone to shift from funny to sad to near-tragic between - and sometimes in the middle of - scenes. The shifts can seem abrupt but they frequently add to the film’s emotional kick.

While both leads make excellent use of their ample screen time, Jones is particularly impressive as the distant yet regretful Arnold. The performance should help broaden the film’s audience to include men as well as women; and it might even be remembered next awards season.