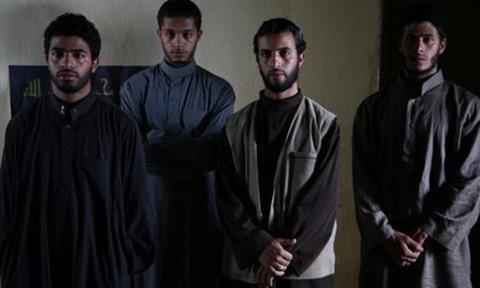 The seeds of fundamentalist martyrdom are sown in the dirt-poor lives of young men raised in the slums of Morocco in Horses Of God, a thoughtful, compelling adaptation of the Mahi Binebine novel The Stars Of Sidi Moumen. Inspired by the 2003 terrorist attacks in Casablanca, the film follows two brothers over the course of a decade as they make the life-changing decisions that will lead them to become Islamist martyrs.

Nabil Yaouch works against the incendiary potential of the material by adopting a measured tone.

The subject matter will be instinctively unpalatable to some viewers but Ali Zaoua director Nabil Yaouch seeks neither to judge nor romanticise their actions, merely to understand them. The result is an absorbing, well-paced narrative that grows increasingly tense and should attract international theatrical interest.

The story begins in 1994 with a boisterous picture of everyday life in the lawless slums of Sidi Moumen for a generation of boys who fight, play football and scavenge the vast mountains of rubbish for hidden treasures. There is a sense of energy here that is reminiscent of Fernando Mereilles’ City Of God.

Sweeping overhead shots capture a vision of the slums as a giant anthill in which each individual is as insignificant as the next. Football and television soap operas are the main escapes from the poverty and absence of hope. Yachine (Abdelhakim Rachid) idolises his older brother Hamid (Abdelilah Rachid) who is seen as the favourite son and true man of their family.

When Hamid is arrested, Yachine has a taste of the quiet life he might have enjoyed with his friend Nabil (Hamza Souidek), working as a car mechanic and dreaming of being with the beautiful Ghislaine.

When Hamid returns from prison he has become an Islamic fundamentalist. It is entirely possible to see the attraction of a religion that offers discipline, purpose and guidance to young men who have none of these things in their lives. Inevitably, Yachine follows in his brother’s footsteps but unexpectedly he becomes the one with a greater belief in the cause and the promise that ” fly horses of God and to you the doors of heaven will open”.

Nabil Yaouch works against the incendiary potential of the material by adopting a measured tone. He presents us with the facts and allows us to draw our own conclusions. That approach makes the final scenes even more chilling as Yachine, now called Tarek, calmly prepares to detonate his bomb in an Italian restaurant.

The film visually echoes the emotional journey of the brothers as it moves from the sweeping, sun-filled exteriors of the childhood slum scenes to the cramped interiors and dark streets of the conclusion. Yaouch is also well served by his choice of real-life brothers for the two central roles. Both Abdelhakim Rachid and Abdelilah Rachid are impressive, charismatic non- professionals with Abdelhakim particularly noteworthy conveying the emotional changes within Yachine.

Screenplay: Jamal Belmahi based in the novel The Stars Of Sidi Moumen by Mahi Binebine