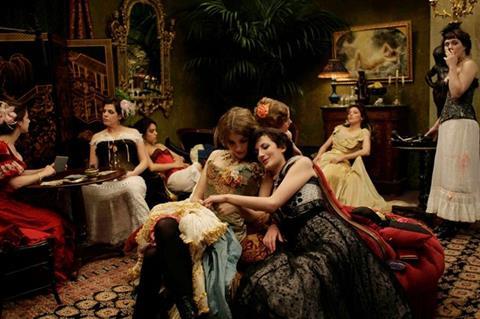 For most of Bertrand Bonello’s House Of Tolerance (l’Apollondide: Souveniers de la maison close) about an old-time French brothel, the old style of making conversation before engaging in “commerce” (sex with clothes on) was still in place in a large but windowless three-story building, arranged vertically from the lushness of the first floor through one level of so-so love rooms to the cramped attic with shared beds for the girls at the top; privacy is an unknown concept.

Possessing static architecture and a cast of low-key actors, the film does not have the energy required to infect even the most vulnerable viewer with its despair or its occasional lightheartedness.

Bonello set his film at the end of the 19th century, a transitional time for the sex industry. Brothels could no longer pay for themselves, so the community of women who lived and worked in them split up, individuals moving to the more solitary and dangerous life peddling flesh on the street.

The overall feel is claustrophobic, and Bonello and the Madame do not let the women go outside, at least alone, for fear of being charged with solicitation. Most of the women were in serious debt to the Madame, so did not have the freedom to move out and possibly attempt to earn money in a different fashion. As the owner says, “Freedom exists, just not here.”

The director has said that he wanted to make a film about prostitution from a historical perspective and from the prostitutes’ point of view. Much of his research he found in the book Daily Life in the Bordellos of Paris, 1830-1930, by Laura Adler. What is up on the screen is a stuffy prison of a workplace, so architecturally self-conscious that its use becomes mannered. The overall feel is enervation and resignation. Even though the women stick together, it is a community of inertness.

Except for a few downplayed dramatic scenes — one of the women (Lvovsky) has her face sliced by a client, another (Trinca) succumbs to syphilis, the youngest girl (Zabeth) escapes — almost no dramatic tension passes through the edifice. Lethargy looms over this particular House of Tolerance.

Such bleakness in a genre that has known catfights and general pizzazz will not translate well into profits, except perhaps in some French markets. The film is too uneven in structure and aesthetic to generate much interest from festivals, but might do okay business in ancillary in the US, where the Weinstein Company has the rights.

Bonello attempts token contemporising of his narrative. Black American soul songs from the 1960s accompany sequences of people working and dancing six decades back. A worse offense is the last scene, just in case we are unaware of how the grand whore houses of the late-19th century shut down, and the women became streetwalkers who, unlike the prostitutes living in the house, shared no solidarity. Possessing static architecture and a cast of low-key actors, the film does not have the energy required to infect even the most vulnerable viewer with its despair or its occasional lightheartedness. The project feels constipated through and through.