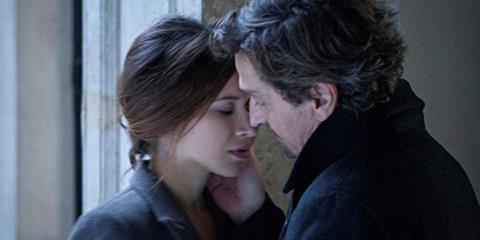 If ever a film didn’t live up to its title, it’s In A Rush (Au Galop), a family drama as stylishly laidback as its director and male lead Louis-Do de Lencquesaing. The actor turned auteur made a considerable splash as the suicidal producer in Mia Hansen-Løve’s Father Of My Children, and his debut feature is rather in the mould of that film - an elegantly executed drama with distinctive, sometimes eccentric dashes of characterisation.

Elegantly, if modestly crafted, and shot with an eye for crisp atmospherics by Jean-René Duveau, this is a consummately crafted package - but in tone, often a rather complacent one.

But de Lencquesaing’s offering, despite its strong cast and unflappable confidence, never quite distinguishes itself from the run of the thoughtful, literary mould of bourgeois drama that is an enduring staple of the Gallic screen. The path has been well trod of late by the likes of Christophe Honoré, Arnaud Desplechin and Olivier Assayas (whose Summer Hours this perhaps most closely resembles, with its theme of letting go of the past). Audiences and distributors already committed to this vein of French drama will probably remain faithful; others will shrug it off as more of the same, however classy.

The story is intermittently narrated in voice-over by novelist Paul (de Lencquesaing), who appears to be writing, possibly for his next book, about his encounter with Ada (Cervi); the story is ostensibly about Ada, but Paul increasingly becomes its focus, which perhaps says something about the somewhat narcissistic bent of de Lencquesaing’s venture. Ada’s settled life, we hear at the start - she has a partner and a young daughter - is about to be disturbed by her meeting with Paul, himself divorced and living with teenage daughter Camille (Alice de Lencquesaing). When Paul, whose publisher Ada works for, walks into her life, Ada is immediately intrigued by his rumpled suavity, and the two soon start an affair.

Meanwhile, Paul and restaurateur brother François (Beauvois) have to deal with their loftily capricious mother Mina (Keller), following the death of their father (a briefly glimpsed Verley). And Camille, more or less the sanest in the family, has her own romantic traumas with her footballer boyfriend.

If the film seems oddly familiar, it’s partly because the director and his real-life daughter Alice have already memorably portrayed a version of their own relationship in Hansen-Løve’s film. In fact, Alice’s performance is the freshest element of In a Rush, her pert wit and alertness bringing a tart spontaneity to proceeedings. Also winning is veteran Keller, drolly imposing as the patrician Mina, especially once the character begins to unravel with dignity.

The film’s most significant flaw, however, is that de Lencquesaing comes across as overly impressed with his own presence. While his brooding, often wry charisma appears to stem from his real personality, rather than being an actorly construct, he makes Paul too seductive to allay accusations of vanity - especially given the ease, and thoroughness, with which Ada falls for him.

Elegantly, if modestly crafted, and shot with an eye for crisp atmospherics by Jean-René Duveau, this is a consummately crafted package - but in tone, often a rather complacent one. While you could only dislike it deeply if you had an animus against haut bourgeois dramas per se, In A Rush comes a touch too close to lifestyle cinema for comfort.

Production companies: Everybody on Deck, Herodiade