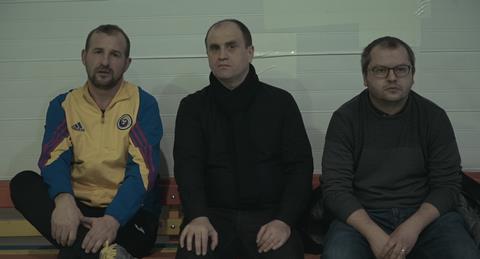 If the intricacies of football’s offside rule are beyond you, then Infinite Football (Fotbal Infinit) could prove quite a challenge. The second feature-length documentary from Corneliu Porumboiu charts his friend’s obsessive quest to revolutionise football and develop a more harmonious game where the ball moves more and the players move less.

It does cross your mind that this might all be some jolly wheeze of a mockumentary with Ginghină as a David Brent figure but apparently it is all to be taken seriously.

In the summer of 1986, Laurențiu Ginghină was kicked in the leg whilst playing football. He subsequently discovered that his right fibula was broken. The following year, he suffered a second injury at work in which his tibia was broken. The second injury was a direct result of the first and completely changed the course of his life. Ginghină eventually concluded that the blame for his misfortune lay not with his aggressive opponent or himself but with the game of football itself. Ever since, he has been devising ways of improving the beautiful game.

We learn all of this as Porumbiou chats to Ginghină at the site of his first injury, at work and at home. Porumbiou is present throughout the documentary, prompting his friend with the odd question, but generally content to play silent witness to the flowing monologues rather than challenge him or offer much in the way of commentary.

Ginghină offers extensive testimony about his many inspired notions to change how football is played, from octagonal shaped pitches to teams that are split into sub teams with players who would no longer be allowed to cross the midfield line. He illustrates his often harebrained ideas with flip charts, boards and even an attempt to play a game under his own rules.

It does cross your mind that this might all be some jolly wheeze of a mockumentary with Ginghină as a David Brent figure but apparently it is all to be taken seriously. There are welcome digressions in which Ginghină considers the roads untravelled, including employment on an orange farm in Florida. We see him at work as a lowly bureaucrat trying to assist an elderly woman still seeking to regain possession of her land twenty-seven years after the revolution.

There is a possibility that the vicissitudes of Ginghină’s life provide some small window into events in Romanian society over the past thirty years—-the factory where he once worked is now a derelict ruin, his hopes for Romania’s membership of the EU have dwindled into disappointment. He is clearly a man who likes to impose order on things, overthrow stifling conventions and find a better way of living and that can only chime with recent Romanian history.

No matter where the film may veer, everything eventually leads back to football and Ginghină’s belief that he has something in common with comic book superheroes, leading a double life of an ordinary pen pusher by day and radical revolutionary of the sporting world by night.