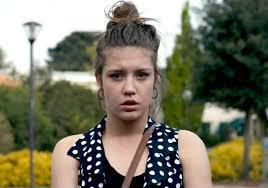 Insecure (Qui vive) is an engaging, if modest, contemporary portrait of a decent man endeavouring to remain honest under trying circumstances. Reda Kateb carries the film as Cherif who lives with his parents while working several security jobs and studying to be a male nurse. He lives and works in unattractive settings, made slightly less dreary when he strikes up a courtship with Jenny, a schoolteacher played by Blue Is The Warmest Colour star Adèle Exarchopoulos. But when Cherif passes along a piece of inside information, things go horribly wrong.

While there was no doubt that Kateb and Exarchopoulos are gifted performers, the film marks Marianne Tardieu as a directing talent to watch.

It’s established in small, effective strokes that Cherif strives to be a good employee although his job thwarting shoplifters in a suburban mall calls for a larger staff. Cherif has failed the exam for admittance to a nursing programme several times but is determined not to be a security guard much longer. For one thing, he’s fed up with a multiracial band of annoying youngsters who make his life harder.

On the commute to work on public transportation Cherif runs into a batch of adoring kids from the school where he used to be the playground guard. Their teacher, Jenny, has the class depict the encounter in an animated short film that’s refreshingly creative and serves as a demonstration that life in the disadvantaged ‘burbs doesn’t have to be colourless or dead-ended.

Although she has relatively little screen time, husky-voiced Exarchopoulos is completely convincing as a modern young woman who values hard work and frank communication. We feel the pressure cooker juggling act Cherif endures in order to get through his working days - and nights. When he’s cornered into giving a regional thug a tip, Cherif topples into a multi-pronged abyss.

Shot in melded-together locations in the Loire and in Brittany, Insecure is the polar opposite of a navel-gazing Parisian tale and manages to avoid most clichés about the French underclasses made up mostly of second and third generation former immigrants. While there was no doubt that Kateb and Exarchopoulos are gifted performers, the film marks Marianne Tardieu as a directing talent to watch.