'Into The Inferno': Toronto Review 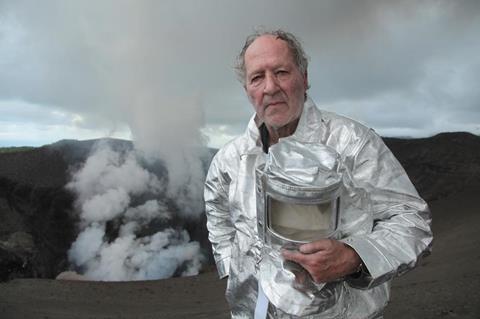 The appealing prospect of joining Werner Herzog as he travels around the world in 80 volcanoes typically morphs into something more wide-ranging and discursive in Into The Inferno. Herzog’s latest documentary yokes his abiding fascination with nature’s destructive power to the affable erudition of volcanologist Clive Oppenheimer. Majestic images of angry eruptions and rushing magma rivers will be compelling on Netflix but are even better on a large cinema screen.

Herzog’s typically dry narration is a particular delight in Into The Inferno.

Herzog met Cambridge University professor Oppenheimer during the filming of Encounters At The End Of The World in Antarctica. A friendship blossomed and Oppenheimer’s 2011 book Eruptions That Shook The World provides the basis for Into The Inferno as filmmaker and academic travel extensively from Iceland to Indonesia, Ethiopia to North Korea visiting the locations of some of the most active volcanoes on the planet.

The spiritual is given the same weight as the scientific as they attempt to understand their importance for local communities and the rituals and beliefs that have grown up around volcanic sites.

Herzog’s La Soufriere (1976) memorably captured the impending threat from a volcano on the island of Guadaloupe where one man calmly remained after thousands were evacuated. He seems continually tickled by the notion of volcanoes as ungovernable forces that could destroy the world one day and that are “spectacularly indifferent” to “scurrying roaches, retarded reptiles and vapid humans”. Herzog’s typically dry narration is a particular delight in Into The Inferno.

Oppenheimer provides us with a good deal of information on volcanoes that have changed the course of human evolution. Appearing throughout on camera, it is Oppenheimer who interviews scientists  and tribal chiefs from the South Pacific Islands  like Chief Mael Moses from Endu Village who believes that spirits live in the fires of the volcano and Chief Isaac Wan whose people believe in an American soldier named John Frum who lives in the volcano and will one day return, showering them with gifts.

It wouldn’t be a Herzog film without his ability to uncover eccentric characters and striking images and there are plenty here from the construction of a Chicken Church to energetic, gung-ho palaeontologist Dr. Time White.

Into The Inferno is perhaps more academic than some Herzog projects and seems to lose its way when they arrive in the notoriously secretive North Korea. The idea is to focus on Mt. Paektu but Herzog can’t waste the opportunity of his rare access to the country and so digresses into exploring the population’s fanatical devotion to its leaders.

Herzog incorporates archive footage throughout that includes some of the images captured by reckless French researchers Katia and Maurice Kraft who seem impervious to danger as they film perilously close to lava. Inevitably, both of them died in a pyroclastic flow on Mount Unzen in Japan in 1991.

Ultimately, it is the images of furious spitting, undulating lakes of magma that prove to be the most memorable aspect of Into The Inferno, especially when set to a carefully chosen soundtrack of pieces by Verdi, Vivaldi, Rachmaninov and Wagner’s thunderous Lohengrin.