It Was The Son 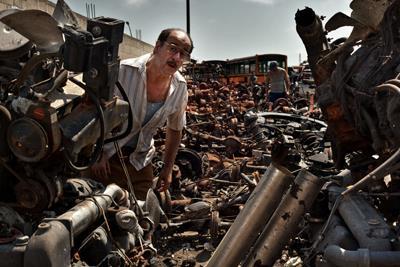 A droll cinematic curio, Daniele Ciprì’s first major outing without his usual directorial partner Franco Maresco is a dour and downbeat twentieth-century Sicilian fable about a hard-up family riven apart by the promise of a sudden windfall. But although the film’s faintly surreal depiction of the Mediterranean island’s freaks and foibles is entertaining enough, it fails to gel into a satisfying story.

The story at the centre of the film is one of those moral parables about the corrupting power of money that goes back to Medieval fables and beyond.

It’s Cipri’s uncertain control of tone and his elevation of style over believable character development that are the film’s main faults. The director’s early collaborations with Maresco (Lo zio di Brooklyn, Toto Who Lived Twice) were wantonly bizarre Sicilian freak-fests underscored by melancholy and a dose or two of cynicism, while their 2003 divertissement The Return Of Cagliostro was a fitfully amusing cinematic mockumentary. In this solo effort, the director tries to blend the sardonic weirdness of those earlier films with moments of tragedy and appeals to the audience’s heartstrings. As might be expected, the mix doesn’t quite come off.

That said, there are moments of odd poetry that kind of work, and Cipri is forging ahead here in his search for a language of cinema that captures his take on Sicily – made up of skewed shots, desaturated colours and oddball narrative tricks deriving as much from oral storytelling (see, for comparison, Michael Winterbottom’s A Cock And Bull Story) as from the script manuals. This original local flavour could propel the film towards some theatrical sales action, though with its flat, sardonic tone it’s hardly a feel-good number. In its rather savage kookiness, It Was The Son (E stato il figlio) has something in common with Paolo Sorrentino’s The Family Friend – which failed to travel much outside of Italy.

The film opens at its most mannered with a narrative frame set in a post office where one of life’s rejects – whose identity is only revealed at the end – begins to tell a story about a son who killed his father in an argument over a scratch on the bodywork of a car. We cut to what we assume to be the family in question: Toni Servillo (Il Divo, Gomorra) plays Nicola, the grifting breadwinner who works with his tough father and gormless son Tancredi as a wrecker, breaking down tanker hulks for scrap metal.

With no car, the trio are forced to walk to their home in a run-down outer suburb, where pugnacious young daughter Serenella, anxious wife Loredana and a grumpy grandmother also reside. Both place (Palermo?) and time (the seventies?) are kept vague, and when we finally see Sicily – in a map in a politico’s office – it’s almost unrecognisable too, more bloated internal organ than three-cornered hat.

The story at the centre of the film is one of those moral parables about the corrupting power of money that goes back to Medieval fables and beyond – though in fact it’s adapted from a recent novel by Sicilian writer Roberto Alajmo. The dark tragicomedy is set in motion when Serenella (alas, the film’s one utterly compelling character) is accidentally shot in the course of a bungled Mafia execution, and a work colleague informs Nicola that there is a state fund for innocent victims of Mafia violence that gives big payouts.

The promise of millions of lire – not quite millions of euros, but a tidy some nevertheless for a family that barely makes it to the end of each month – sets in train a cranking dramatic mechanism that needs some oiling. In order for it to work, characters are squeezed at the last minute into spaces they never inhabited – like the previously mostly absent grandmother, who for the purposes of the denouement is required to become a kind of evil genius.

Servillo is solid, as ever, though there’s something a little samey about many of his recent roles, including this one (perhaps it’s time for a sabbatical?). The director is better at scene setting than dynamic narrative, and certain vignettes (especially the odd, almost dreamlike beach sequence that precedes the tragedy) and recurring tropes (a TV that never works, Nicola’s habit of zipping himself up only after he comes out of the bathroom) capture our attention. The production and costume design of this 1970s-ish netherworld is spot on, while the woozy soundtrack, part orchestral suspense, part pizzicato humour, is a fine accompaniment to the wacky Sicilian world of Daniele Cipri.

Screenplay: Daniele Cipri and Massimo Gaudioso, based on the novel by Roberto Alajmo