It’s About To Rain 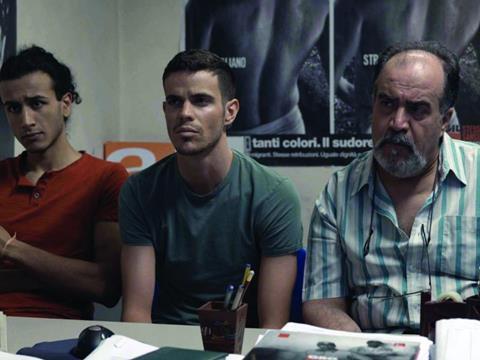 Italy-set drama It’s About To Rain (Sta Per Piovere) trawls familiar territory – an immigrant family fighting against authorities determined to expel them from the country they have lived in for years – with a certain well-meaning style, and while it is an oft-told story, writer-director Haider Rashid focuses on emotions rather than politics and delivers a subtly engrossing story.

Writer/director/producer Haider Rashid directs with a sure hand, never resorting to simplistic over-emotional moments and allowing his characters a real sense of dignity in amidst the awful events happening to them.

The film, which had its world premiere at the Dubai International Film Festival, features an impressive lead performance from newcomer Lorenzo Baglioni as a young man born in Florence, who works in a bakers, is a fanatical supporter of the Italy football team but whose life is torn apart when his father, an Algerian who has never sorted residency in the country, loses his job and is told he and his family will be expelled from Italy.

The story may well be a familiar one, but it is simply and empathetically told and builds nicely without resorting to any shrill melodrama, allowing the absurdity and sadness of the situation the family finds themselves in drive the drama.

Said Mahran (Baglioni) has a nice life. He enjoys his job and the banter with his co-workers, is in love with girlfriend Giulia (Giulia Rupi) and hopes to marry here, and is loyal to his father Hamid (Mohamed Hanifi) and brother Amir (Amir Ati). But life is turned upside down when his father loses his job at a leather factory.

For reasons never made clear to anyone, his father had never been granted residency, and despite the fact that his two sons had been born in Florence they have to apply for visas every few years. With Hamid’s job gone the entire family is faced with having to leave for Algeria. Angry and upset Said initially tries to take his story to the media, but gradually starts to accept his plight

In a powerful scene Said paints his face with Italian colours to stand and watch the European Championship football final between Italy and Spain, with this sequence intercut with footage of the depressed managing director of his father’s leather factory looking to commit suicide, driven by a pounding and evocative music track.

Writer/director/producer Haider Rashid directs with a sure hand, never resorting to simplistic over-emotional moments and allowing his characters a real sense of dignity in amidst the awful events happening to them.