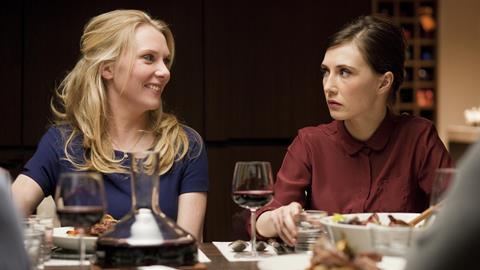 Rambling road trip film Jackie is a real honest-to-goodness charmer as two Dutch twin sisters head off to the US and the wide open spaces of New Mexico to spend less-than-quality time with their surrogate mother Jackie, a woman they have never met but are forced to deal with when she is hospitalised. The premise may sound lightweight, but the film is beautifully performed, warm and funny and looks terrific and certainly deserves to find distribution.

Jackie succeeds as a rather enjoyable and big-hearted film that us never less than watchable.

The twins are wonderfully played by real-life sisters Carice and Jelka van Houten, while Oscar-winner Holly Hunter has a fine old time playing the weathered oddball Jackie, a woman who has little time for the intrusion in her life but who comes to appreciate the sister’s assistance. Hunter’s presence should help sales, while the van Houten sisters have their own star quality, with their innate rapport helping paper over the rather soft dramatic set-up.

Directed with a lot of warmth by Antoinette Beumer (sister of actress Famke Janssen and who made Dutch hit The Happy Housewife with Carice von Houten), the film – which could have benefitted with a smarter and more evocative title – succeeds as a genial road-trip with some nice snappy dialogue, and while the story is unfocussed at times it ends with a smart and oddly satisfying twist.

Twin sisters Sofie (Carice van Houten) and Daan (Jelka van Houten) barely see each other in Amsterdam. Dark-haired Sofie is busy with her career as  a magazine editor, while ditzy blonde Jelka and her husband Joost (Jeroen Spitzenberger) are planning children. They had never met their mother Jackie as he was a surrogate for their two gay fathers, but out the blue they get a call from the US.

A woman had badly injured her leg and they only family the hospital could find was via a photograph of the twin girls as babies. Daan, who has fantasised about meeting her biological mother, manages to convince the uncertain Sofie should go the US to help the woman.

And so begins their oddball road trip. With a damaged leg and ruptured eardrum, Jackie is unable to fly and so Sofie and Daan grudgingly agree to drive her battered RV to the rehabilitation centre, and head off in the back roads of New Mexico. Their journey sees them getting closer to each other; gradually getting snippets of information from Jackie; having a close encounter with a snake; engaging in some karaoke and bumping into the all-female biker gang ‘Dykes on Bikes’, who help them out when they run out of petrol deep in the desert.

Carice van Houten is excellent as the prim, firm and rather bitter Sofie and is nicely contrasted by a warmer performance by Jelka van Houten, whose character actually develops more as the film draws on. Holly Hunter’s character is initially remote and unfriendly, but comes to appreciate the attentions of the twins, who switch between Dutch and English with ease.

An unexpected twist towards the end gives the film a nicely judged emotional highpoint, and despite a tone that is perhaps too gentle at times and lacking a real dramatic arc, Jackie succeeds as a rather enjoyable and big-hearted film that us never less than watchable.