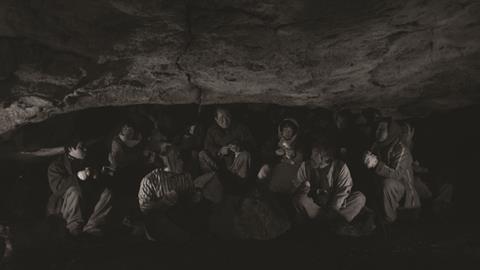 Depicting events surrounding the Jeju Island uprising that took place in 1948, the film provides a rare insight into some of the harrowing events that occurred, but with little context given, international viewers are bound to find it perplexing. Nevertheless, due to its rich aesthetic together with its relatively unknown historical subject matter, Jiseul is likely to continue to attract interest as it makes its international premiere at Sundance next month.

Although it’s unlikely to generate mass appeal both locally and internationally, O Muel’s compelling depiction of this tragic event is set to leave a lasting impression.

Premiering at the Busan International Film Festival, it won a collection of awards including the DGK award for Best director (shared with The Russian Novel’s Shin Yeon-shick), the NETPAC jury award and the citizen reviewers’ award becoming the big winner at Asia’s largest film festival.

The film follows a group of villagers on Jeju Island (located off Korea’s Southern coast) as they hide in a cave after hearing that they have been labeled as communist rebels following a local uprising against the government, which was sparked when police opened fire on a demonstration commemorating the Korean struggle against the Japanese rule.

Aside from some minimal information provided by a small number of captions, the film makes it difficult for viewers and especially international audiences to gain a solid understanding of the events it depicts, which invariably hinders the film’s overall impact.

Interestingly, however, without a leading character or set of leads, writer/director O Muel instead gives many of the characters an equal share, which serves the narrative well as it prevents the film from becoming unnecessarily melodramatic.

O Muel, a Jeju Island native who has also used Jeju as a setting for his other films (20120’s Pong Ddol and 2009’s Nostalgia) gives the film a unique and strong artistic feel with the help of cinematographer Yang Jung-hoon who shoots in black and white and juxtaposes a number of long-takes and unusual camera angles that helps generate the film’s somber and stylistic tone.

Although it’s unlikely to generate mass appeal both locally and internationally, O Muel’s compelling depiction of this tragic event is set to leave a lasting impression, even it’s somewhat difficult to fully grasp.