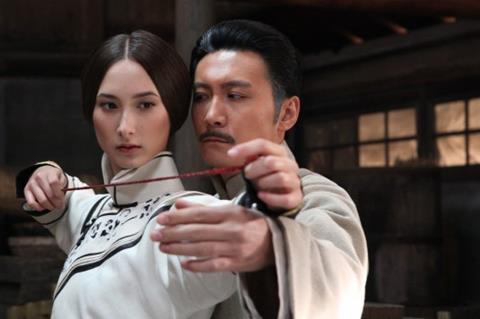 An art house kung fu movie may sound like a contradiction in terms, but it is the only fair way to describe this ambitious production, with its remarkable art work, spectacular locations, fine cinematography, lively musical score and featuring a number of interesting themes, all of it bogged down by a broken narrative that defies all the rules of continuity. Some may appreciate the challenges writer-director Xu Haofeng takes on – as well as his partial achievements - but even they will finally have to concede he does not succeed completely.

Though the film never makes it clear how interested this Judge Archer is in any aspect of justice, it certainly explores his fascination with the opposite sex.

Similar to the approach of Westerns portraying the end of the Wild West era and everything it symbolised, Judge Archer, which takes place in the early part of the 20th century, deals with the end of the martial arts age, when the highly sophisticated ancient traditions where brutally pushed aside in China by the introduction of gunfire and explosives. No longer a necessary art or science, its usefulness obliterated by more radical means of destruction, kung-fu lost its significance only to be resuscitated by the movies towards the end  of that century in a far more flamboyant version through the work of such stars as Bruce Lee and other.

Xu, a novelist and a researcher on this subject goes back to what, according to him, is the authentic kung-fu, a minimalist version far removed from the show-off performances of his screen predecessors. Taking place in the early days of the Chinese republic, the plot follows a young man (Song Yang) who escapes from his village after being cruelly beaten up and witnessing the rape of his sister by the local Landlord.

He finds refuge in a monastery where he is calmed down and on his being released, he lands the riskiest job of them all – he becomes the Judge Archer, the arbitrator whose role is to settle down the conflicts between the various Martial Arts Academies, each one of them serving a different war lord. Needless to say, this means not only must he be wise, just and impartial but also able to defeat anyone who might dispute his decisions.

Though the film never makes it clear how interested this Judge Archer is in any aspect of justice, it certainly explores his fascination with the opposite sex. Erdong (Yenny Martin), no mean fighter herself, using such varied weapons as a piece of string and a dagger, wants him to revenge the death her father, while another, Yue Yahong (Li Chengyuan), a Chinese opera singer and no fighter at all, just flashes happy and sad smiles, but also proves to be as deadly dangerous as the other.

How all these elements link together remains pretty much of a mystery all through the film, and why some people are fighting others is rarely clear, but at least Judge Archer and several of his opponents are given ample chance to display their dexterity at kung-fu duels, and once in a while they are even allowed to use their lances. The techniques of archery are mentioned, but any great displays of sheer acrobatic virtuosity is strictly banned.  Explosions at the end suggest martial arts have outlived their purpose, but why this should happen is never clear.

The truth is that many of the answers can be found in the press book accompanying the film, providing ample explanations about the political and military strife in the country. But since press books are not distributed along with the admissions to the paying audience, placing them in a press book is not good enough. Though there could be no complaint with regards  the look of the film and the way each individual scene is staged and directed, the final job of putting it all together still remains unpolished with even the performers seemingly rather stunned by the roles they perform.