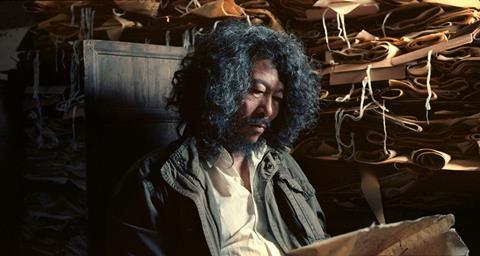 In a daring example of artistic risk, Inner Mongolian documentary maker Erdenibulag and Welsh translator-photographer ap Richard push to the outer limits the well-tread theme of Kafka’s final, unfinished work, The Castle: the alienation and dehumanisation of the individual in the face of incomprehensible, dysfunctional bureaucracy. The tenacious, subversive duo succeed, at the possible cost of turning off traditional arbiters of the Kafkaesque.

The structure and action are illogical, but that is precisely the point of the source.

K, a minimalist film with an intentionally grungy veneer, was completed with little regard for commercial prospects, although the imprimatur of producer-mentor Jia Zhang-ke could help secure limited distribution in a few select territories. Potential audiences can be tapped at festivals, in museums and similar venues, and in specialised ancillary. Seasoned cinephiles, faithful bibliophiles, and connoisseurs of alternative art will be intrigued by its provocative execution.

The film’s methods of depicting contained chaos make it more unsettling than past movie and theatrical versions of The Castle, but the journey – set in desert-hot Inner Mongolia in recent times as opposed to snowy Middle Europe a century ago – reaps rewards for those up to the challenge. Villagers are often interchangeable, minor technocrats appear out of nowhere, and a lengthy story-within-the-story complements the non-linear nature of the narrative. K not only disrupts the contiguity of cinematic space we are accustomed to, but also short-circuits conventional continuity. The structure and action are illogical, but that is precisely the point of the source.

K (first-timer Bayin, whose shaggy hair, unkempt beard, and piercing eyes serve him well as the archetypal alien) is a land surveyor mistakenly asked to work at a faraway location called The Castle. Lost at first in the vast, forbidding steppes, he arrives in the village nearest his destination—no establishing shot, here or anywhere else—where he is greeted by the locals with contempt, then ignored by minions of the overlords meant to be his bosses.

From afar, superiors at The Castle assign him a pair of physically distinguishable assistants, but, indicative of the dry humor that runs throughout the film, both he and the higher-ups consider them identical. (The abuse perpetrated by this unlikable protagonist ends up pushing the two away.) We realize upfront that we have an unreliable narrator. The aggressive landlady at the Bridge Hotel, where K resides in the early days of his visit, chastises him, “You are only an outsider!”

K encounters a succession of male secretaries to the top dogs, who are always a few metres or minutes away, but his main contact with elusive chief honcho Klamm (called by one woman merely “a rumor”) is Barnabas (Nomindalai), a skinny messenger who becomes more important as the catalyst for side stories about his two attractive sisters that enrich the narrative while slyly throwing it off track. Irritated, K goes through the motions associated with the role of a functionary, such as making appointments with Klamm, which are never kept, and prioritising “pressing concerns.” Initially defiant, he becomes increasingly blasé. By the time he learns that his invitation to survey was a clerical error, he has become fully appropriated by this strange realm. When the idiotic mayor sweetly demotes him to school janitor, he accepts it as a plausible career move. He speaks to the other characters as if this were a normal, efficiently run enterprise, rather than a non-operating dictatorship kept afloat solely by power.

There is little difference here between the states of waking and dreaming. During his extended wait, the sexually driven, borderline narcoleptic K carries on a torrid affair with the barmaid Frieda (Jula), with scratchy big band music from an old phonograph accompanying their lovemaking. Foreplay is as absent as motivation. After the fact, we see observers in the conjugal room. Things just happen.

Cause-and-effect is an unknown quantity. Spatially, this translates into deformation and fragmentation, and dark interiors so claustrophobic that brief inserts of exterior shots become a welcome relief. In a second hotel, an extremely long corridor with peeling walls leads to nearly identical shabby rooms on either side, but we are not privy to the process of moving from one to another. A character just gets there. The spectator is forced to trust ellipses from start to finish. Colors clash to further undermine our first responses, as does the inexplicable, split-second appearance overhead of a new jet plane that is breaking the sound barrier. One constant, however, is the insistent natural lighting, which suits the shadowy gestalt to a T.