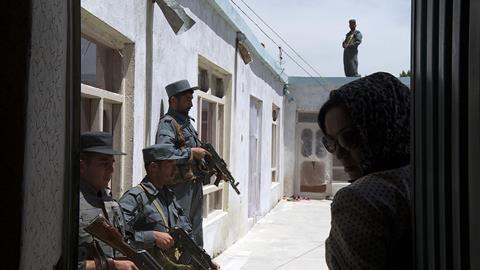 A fascinating subject is never fully explored in this lackadaisical documentary, which did at least find the right heroine in Afghan policewoman, movie maker, film star and feminist Saba Sahar…but fails to exploit the apparent gold mine it has unearthed.

Kabul Dream Factory is put together without much of a sense of drama, moving along at a uniformly leisurely pace.

Instead of addressing the myriad of questions a Western audience would be interested in, director Sebastian Heidinger is quite content to follow her around, occasionally using clips from her films, but never really pries beneath the surface to find more about her, either from her own mouth or from the people around her.

There’s plenty of Kabul street footage, a number of visits to the police headquarters and brief glimpses of female police training, a brief religious explanation extended by a mullah who argues the police needs the second sex because men are not allowed by the Sharyia to body search women, but nothing much about how Sahar, being a woman, does operate, either in private or professionally, really comes to light.

Produced with the assistance of German television, Heidinger’s documentary has a ready made outlet on the small screen, but not much of a future beyond it.
What we do find out about Saba Sahar, is that she enrolled in the police force, after her father gave his consent, when she was 17; that she parades wearing pant suits in a country where women are expected to adopt much more modest attire; that she can handle an automatic rifle and drives around a lot looking for movie locations, accompanied by her cameraman, entertaining an unusual relationship with the authority in her hands instead of his.

She occasionally does wear a burka, but it is only when she goes shopping, hiding behind a veil in order not to be recognised by the shop owners, who would immediately charge her double for their merchandise. We also see her praying which should tell us she is a devout Muslim, up to a certain point.

One hilarious sequence shows Sahar the Bollywood star, playing a sort of super-woman and using martial arts to rescue a girl from the hands of hoodlums attacking her.
Some questions are never answered - or even tackled - such as the nature of her family life. She has a cute 10 month-old baby, but there is no sign of the child’s father, and it is never clear if she is still a policewoman of now dedicates her time to her movie career.

Kabul Dream Factory is put together without much of a sense of drama, moving along at a uniformly leisurely pace. This looks rather like a project that needs a bit more work before it is let out into the world.lates