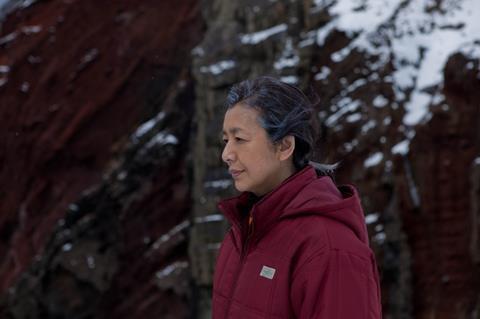 A tough challenge even for the most patient audiences, this excruciatingly slow attempt to raise such issues as loneliness, non-communication or fear and longing of death, manages to keep its audience at arm’s length, offering a gloomy portrait of human fate that defeats any attempts to be tampered with.

The desolate look in the eyes of veteran actress Keiko Takahashi effectively suggests the profound, tired compassion for those she is catering to on the last leg of their journey through life.

Placed in a small, remote, fishing port, Tatsuya Yamamoto’s persistent obsession with suicide and his cryptically laconic manner of dealing with it, while evidently aspiring to deliver a symbolically philosophical message about life and death, is ultimately too somber to gain any popularity contests. The film had its world premiere in competition at the Karlovy Vary Film Festival.

Chiyo (Keiko Takahashi), a solitary older woman who keeps the family store she inherited after the death of her mother, is haunted by death. As a child she had seen her father jump to his death from the nearby Kamihate Cliff and since that time, the place had acquired the unflattering reputation of drawing suicide candidates who first come to her store to buy a loaf of bread and a bottle of milk, eat and drink, then go up to the cliff, take off their shoes and step into the void.

To put an end to this lugubrious tradition, she repeatedly tries to close down her shop, claiming she has no bread and no milk to sell, at one point she even tries to prevent a young woman and her little daughter from going up to the cliff only to be told next day that the two of them had found another way to put an end to their lives.

A parallel - and not very well integrated second plot- involves Chiyo’s brother (Susumu Terajima, a familiar face in Takeshi Kitano films) living in the next town, as lonely as his sister is despite his febrile activity to save his faltering firm, and courting suicide when his debts threaten to put him out of business.

To leave no doubt about his intentions, Yamamoto points out that the name of the fishing town, Kamihate, can also be interpreted as “the end of the end” - that is, a place for people at the end of their tether. Chiyo is sort of administering their last rites, while the practically empty bus, dropping in every day, is similar to Charon’s boat in the Greek mythology, taking his customers across the Styx, but in one direction only.

There are more hints of eventual metaphors, whether it is the retarded milkman forever arranging his bottles, the ominous shots of feet crossing Chiyo’s doorstep, the two young girls jesting with the bread and milk ritual but terrified when it threatens to bite them back, and more.

Though the lighting and length of each shot have much to do with the deliberately crepuscular atmosphere of Kamihate Store (Kamihate shoten), the ostentatious insistence to have each character move very slowly inside the frame is responsible to a great extent for the aura of doom reigning over the proceedings. The desolate look in the eyes of veteran actress Keiko Takahashi effectively suggests the profound, tired compassion for those she is catering to on the last leg of their journey through life, her only successful attempt to thwart fate resulting in her going back to the mournful duty she had tried to abandon.