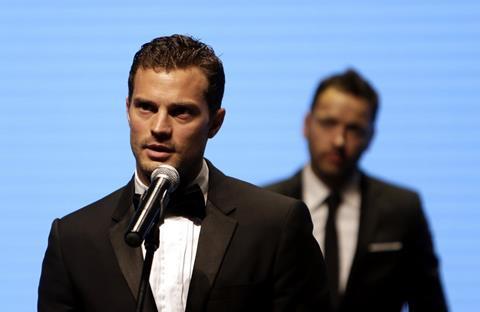 Dornan, who was met by a legion of fans in the picturesque spa town in the Czech Republic, attended the festival with the world premiere of opening film Anthropoid alongside co-stars Toby Jones, Charlotte Le Bon and local actress Anna Geislerová as well as director Sean Ellis (Metro Manila).

At the opening ceremony, Dornan said: “We realise what an important story this is to Czechoslovakia, now the Czech Republic. We felt a huge amount of pressure to tell the story in an appropriate way and honour the men and women involved. I really hope we’ve done that. We’re very proud of the movie and I hope that we’ve done the country proud as well.”

Addressing the packed theatre at the Hotel Thermal, Dafoe said: “I’m very happy to be here at Karlovy Vary. Film is so important. It gives us so much and I’m just very proud that my contribution has been honoured by this award. Thank you so much.”