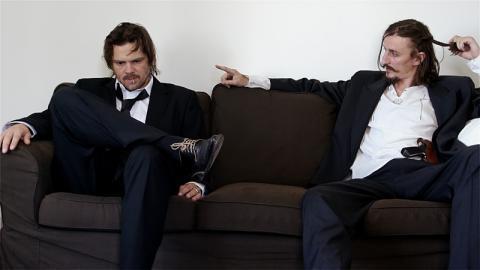 A tentative tribute to Quentin Tarantino made on a shoestring budget, high on form but low on content, this third feature from actor Florin Piersic Jr, the son of the Romanian stage and film icon Florin Piersic, may appeal to younger audiences and festivals catering for them, but it is a long way from matching either its models or ever going beyond one-liners whose flavour may be lost in translation.

The entire film relies mainly on its two lead performers and their capacity to deal with the vast amounts of text they have to handle.

Shot in what appears to be a vacant, not yet occupied new building, the entire plot has two contract killers waiting for their mark to show up and be shot. Built in sequences which could almost stand on their own and for a while, every one of them  is made up of one shot, the camera hardly moving and the dialog attempting to provide all the irony of the situation, a counterpoint to the hours-long immobility imposed on them for no clear reason by their invisible boss. The film screened at the Transilvania International Film Festival.

The moodier, more experienced killer (played by Piersic himself) starts by running the show, throws his weight around and accuses his partner (Cristian Ioan Gutau)of being an unprofessional country bumpkin who lacks the knowhow and the finesse required by the job. Then the second killer moves front stage, shows himself to be far more ruthless, unscrupulous and brutal, disposes of anything that moves around him, delivers all the monologues needed to confirm his attitude in case anyone hadn’t grasped it yet, and then leaves for the next execution. The initial decision of having one shot per sequence, a challenge in its own right, is dropped midway, when it obviously became too complicated to sustain, for a more conventional type of montage.

Interesting enough as an early exercise de style, Piersic’s sketchy piece has to milk every scene down to its bitter and often unsavoury end, going on and on way after it has delivered every bit of message it contained. Problem being, of course, there are no real messages to be delivered anyway, the plot is schematic at best and holds no surprises.

Interestingly enough, the same dramatic subterfuge, a child’s disease, is used twice in the film, including a clumsily overlong conversation between the first killer (Piersic) and his wife, who is in a hospital waiting for their child to be operated on. Dragging in religious motives for the subsequent monologue could be justified only for the adding on of a few more minutes to the running time.

As it looks now, the entire film relies mainly on its two lead performers and their capacity to deal with the vast amounts of text they have to handle. Piersic looks rather stodgy and embarrassed, desperately trying to look like a typical heavy in the American gangster movies. In contrast, Gutau who is a non-professional actor, has absolutely no problem with the words or the actions. His thin face and the kind of cruel, sardonic, naturally coldblooded expression fits his character to perfection. Needless to say, he steals every scene he is in, and since he is in most of them, the picture is his more than anyone else’s.