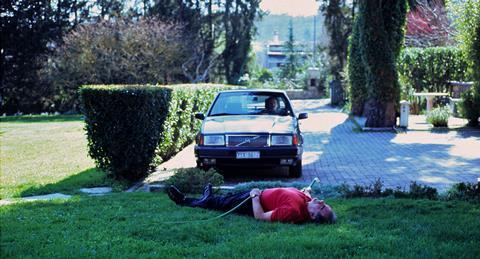 While intriguing and occasionally amusing, Babis Makridis’s film L does little to further the notion of a new wave in Greek cinema (as evidenced in the likes of Dogtooth, Attenberg and Alps), and at times feels like an overly extended short film rather than a feature of real substance.

There are many mildly amusing moment and clever use of motifs.

Screening at Sundance and Rotterdam, L essentially dwells on the notion that you are what you drive, and stars Aris Servetalis (from Alps) as a dedicated driver whose life – such as it is – revolves around his car, barely batting an eyelid whether it be meeting his family or his employer.

He lives in his car, has set times to meet up with his wife and two children (who he takes for a drive) and has only a few friends. Wry moments of humour come from an employer who also happens to be a narcoleptic, with the straight-faced driver arriving at the man’s home to find him flat on his back asleep, with hosepipe still in hand.

There are many mildly amusing moment and clever use of motifs – bears, honey, helmets, keyrings all feature – but despite the odd moments that will make a resolute viewer smile L is rather too cold and distant to really engage.

As the driver has to switch from car to motorcycle the film takes an interesting spin as he heads off into a more edgy existence and while there are some beautifully structured sequences – it should be said Babis Makridis does shoot with a great deal of precision and sense of composition – the film is just too willfully obtuse to appeal to anyone other than dedicated festival audiences and enthusiasts of Greek art cinema.

Screenplay: Efthimis Filippou, Babis Makridis, based on an original idea by Yorgos Giokas