Legend Of The Guardians: The Owls Of Ga'Hoole 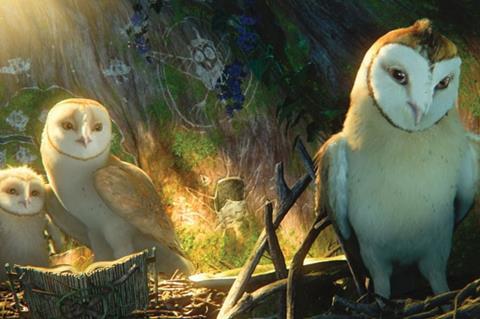 The Australian makers of Happy Feet turn to birds of a more serious feather with Legend Of The Guardians: The Owls Of Ga’Hoole, a handsomely crafted CG animated adventure that’s heavy on swooping 3D action but light on emotional resonance. Based on a popular children’s fantasy book series, Legend should perform decently for producers Village Roadshow and Animal Logic and distributor Warner Bros., even if it doesn’t match the $384m global box office take of the lighter and cuddlier Happy Feet.

The owls are impressively realised and only slightly humanised and the 3D comes to the fore during frequent flying and battle scenes.

Warner opens the PG-rated film in North America on September 24, at least a month before most of the autumn’s other family and animated offerings. Most international openings come in October, allowing Legend to tap into the school half-term holiday audience.

The script takes in events from the first three books in American author Karthryn Lasky’s Guardians Of Ga’Hoole series, a Lord of the Rings-style epic set in a world of owls. Hero Soren (voiced by the UK’s Jim Sturgess) is a young barn owl abducted by the Pure Ones, an owl clan led by the evil Nyra (voiced by Helen Mirren). Soren escapes with an unlikely band of owl friends and goes on a dangerous trip to summon the legendary Guardians - among them war-weary screech owl Ezylryb (voiced by Aussie Geoffrey Rush) - who join him to foil the Pure Ones’ plans.

As directed by Zack Snyder (300, Watchmen), the film spends a lot of time showing off its CG animation work and 3D effects. The owls are impressively realised and only slightly humanised and the 3D comes to the fore during frequent flying and battle scenes. Some dark and quite scary scenes are offset by a couple of mildly effective comic interludes and a couple of incongruous pop-song montages.

Unfortunately, the abundance of action and plot often makes the film feel rushed and leaves little time for the story’s broader themes - among them a refreshingly adult take on the realities of war - to develop.