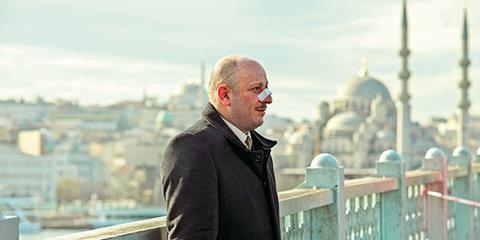 An Imam replaces the classic private detective in Onur Unlu’s new comedy thriller which bears all the earmarks of a rush job made in a hurry to bank on the successful reception of his last film Thou Gild’st the Even, last year. Though local audiences will probably appreciate Unlu’s energy and the numerous political quips strewn through the dialogue, the haphazard nature the plot of Let’s Sin (Itirazim Yar), in dire need of serious restructuring, will limit the chances abroad, unless it is to other Turkish communities that will be no doubt impressed by his Best Director Award in Istanbul this year.

A Sherlock Holmes kind of finale is supposed to untie all the knots, to reveal the culprit and tell the audience that Selman’s conduct was less arbitrary than it may have seemed.

Serkan Keskin (Best Actor at Istanbul in 2014), one the leads in Unlu’s recent short lived TV series I Also Miss  (Ben de Ozledim), carries the film on his solid, dependable shoulders, playing Selman Bulut, an Iman who takes upon himself the investigation of a murder committed in broad daylight, inside his mosque.

With a past in the Army and, before taking the vows in the boxing rink, evidently well-educated since he handles without difficulty not only Koran citations but also references to Kokoshka and Dostoyevsky, and with a solid physique, particularly his crooked nose which can take any amount of beating, Selman is not the kind of Father Brown cerebral detective one would expect from a Man of God, but rather more of a Mike Hammer, using his feet to rush around the city and his fists to clear his way, whenever there is an obstacle standing in front of him.

An amusing premise, but never really worked out by a script that seems too eager to jump at familiar clichés and insufficiently concerned with making sense of the characters or the plot. It all starts with two gun shots in a mosque, a dead believer and an absent apprentice muezzin, who claims he was away from the premises because he had to assist his ailing adoptive mother, who believe it or not, is an Armenian Christian.

It goes on with more and more characters added to the proceedings, including corrupt policemen, an impossibly sleazy lawyer, a femme fatale bank manager, a mysterious retired major in a wheelchair with connections to the high and mighty, the owner of an electronics shop, a former officer operating a restaurant on a boat, a gang of young stone-throwing teenagers led by an older boy wearing a Superman shirt and deems himself a boxing champion, a whole bunch of goons whose intentions or employers are doubtful, all of them related to the dead man, some of them as his victims, others as his partners.

As for the dead man in the mosque, it turns out that not only was he a nasty Shylock pitilessly squeezing every cent out of his clients but he was also a vile pedophile pervert who deserved his fate. And if all this is not enough, Selman’s young daughter informs him that she is sharing her flat with a man and asks for his blessing. And that will become part of the mystery too.

Bringing all these various ingredients under one roof and justifying their presence there is simply too much to ask of Unlu’s script, which would rather forge ahead without worrying about details, drowning the frequent incongruities in loud, aggressive music. To compensate, there are some strikingly attractive images, lots of frenetic but good-humoured mayhem, plenty of insinuations about the dubious morals of the system at all levels, not to mention scandalous images that no true Muslim believer would appreciate, such as the sight of an Imam guzzling raki to his heart’s delight but for a good cause, for it is to help ease evidence out of a witness.

The main problem, however, rests with the script and with the manner in which the footage was put together in the editing room. The Imam’s actions and what he gets out of them is often unclear, and for those who do not speak Turkish, the appalling English subtitles add even more to the general confusion. A Sherlock Holmes kind of finale is supposed to untie all the knots, to reveal the culprit and tell the audience that Selman’s conduct was less arbitrary than it may have seemed. Additional clips suggest the audience simply missed the evidence displayed under its nose. Maybe because it was too well hidden.