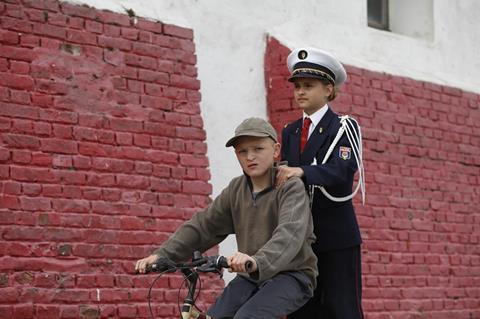 Given that he’s generally considered the epitome of French art cinema at its most sombre and high-minded, the thought of Bruno Dumont turning to comedy seems wildly counter-intuitive- almost as much as, say, Bela Tarr directing a Broadway musical. Nevertheless Li’l Quinquin (P’tit Quinquin) really is Dumont’s first comedy - and yet it’s very recognisably a Dumont creation, despite the tone being outright goofy, even knockabout.

TV viewers unfamiliar with the director’s work may resent being led up the garden path by so prickly a subversion of conventional detective structures. Fans, on the other hand, are likely to relish this departure from form, and yet find themselves worried by some of the same concerns that his previous films have posed.

Set in Dumont’s usual Northern French stamping ground, on the Côte d’Opale around Calais, and casting the same sort of non-professionals and social misfits usually seen in his films, Li’l Quinquin was made as a four-part TV series, but premiered in Cannes Directors’ Fortnight in a three-hour, 20-minute slab, albeit divided into four chapters. This unwieldy length will make it a tough theatrical sell, but Li’l Quinquin will make its mark as a festival favourite - especially given that this outré, provocative take on TV police mini-series material is hugely enjoyable.

As to where it fits in the Dumont canon, you could almost describe this as a quasi-remake, in farcical mode, of the director’s 1999 murder drama Humanity. Like that film, Li’l Quinquin has a hopelessly inept, oddly naive, detective trying to get his head round a gruesome murder case - but this film takes the initial premise into bizarre areas that suggest a cross between Twin Peaks and Northern French comedy hit Welcome To The Sticks.

Ostensibly the film’s central figure is Li’l Quinquin (named after the local lullaby), a crop-headed urchin who lives in a small rural community with his parents and grandparents; he’s played by Alane Delhaye, whose tough-lad candour brings the film distinct echoes of Loach’s Kes. When not generally making mischief with his pals Jordan and Kevin, or scaring tourists with firecrackers, Quinquin spends time mooning over his young neighbour Eve (Lucy Caron), who plays trumpet in the local marching band, and who’s not averse to joining him in the odd chaste hug, or even a tentative kiss.

One day, the kids stumble on the police investigation of a strange case - the discovery of a cow stuffed with human body parts. In charge of the investigation - the first of a series of grisly deaths - is Captain van der Weyden, the last word in bumbling cops, who can be counted on to miss every possible clue, fail to ask every obvious question, and to say the wrong thing at every opportunity. So disheveled that he makes Columbo look like Beau Brummell, van der Weyden, as played by Bernard Pruvost, is altogether a cartoonish figure, with his mop of grey hair, his scrubby toothbrush moustache and eyebrows that make his resemble an elderly Charlie Chaplin, plus an array of facial tics that keep his face in constant bemused motion, to mesmerising effect. The Captain is accompanied by his trusty lieutenant and not-so trusty driver Carpentier (Philippe Jore), who’s somewhat smarter but strikingly challenged in the dental department.

It would be unfair to reveal too much of the plot - except to say that it isn’t exactly a conventional one, as the investigation proceeds by hiccups, false leads and dead ends. The narrative is partly a framework for comic set pieces, like a very funny funeral service where even the priests subside into giggles, and a priceless visit from a small boy who fancies himself as the Pas-de-Calais answer to Spider-Man.

There’s also rich capital to be made from the region’s distinctive accent and dialect. But a very dark, and indeed serious streak emerges in the comedy, with many of the characters we might expect to sympathise with, including Quinquin himself, turning out to be viciously racist. As usual with Dumont films, this one combines equivocal fondness for its characters with desperation at the downright folly, not to say bestiality, of humankind.

This makes Li’l Quinquin as troubling as any other Dumont film, and TV viewers unfamiliar with the director’s work may resent being led up the garden path by so prickly a subversion of conventional detective structures. Fans, on the other hand, are likely to relish this departure from form, and yet find themselves worried by some of the same concerns that his previous films have posed.

In particular, although it’s difficult to be sure which of Dumont’s non-professionals may or may not have physical or mental disabilities, there’s once again the feeling that, if the actors themselves aren’t being exploited, the theme of disability is - notably in two scenes in which characters with learning difficulties are used for laughs. Even so, you get the impression that everyone here is in on the joke, which is overall willfully taboo-flouting. Residents of the Côte d’Opale, however, may feel that Dumont has gone too far this time in making them look buffoonish, to say the least.