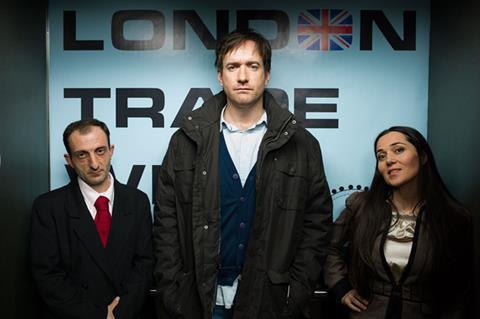 A droll dark comedy about a well-meaning film director who finds himself out of his depth when he gets roped into making a film about there of a fictional Eastern European country, the engagingly made Lost In Karastan is a film punctuated by nice performances (from Matthew Macfadyen and MyAnna Buring especially) and subtly playful moments of humour.

Matthew Macfadyen convinces as a man increasingly out of his depth while MyAnna Buring is charismatic and suitably enigmatic as a women who always knows more then she ever lets on.

The film, directed and co-scripted (with Ida director Pawel Pawlikowski) by British filmmaker Ben Hopkins is engagingly freewheeling as it pokes fun at politics, ego and film-making, though at times plays it too low-key when a little more outrageous humour wouldn’t have gone amiss. The film screened recently at the Rio Film Festival.

Matthew Macfadyen (from television’s Pride And Prejudice and so good recently in 2012’s Anna Karenina) plays director Emil Forester, who gained acclaim with his films The Line Of Infinity and 79th Parallel, but is currently suffering from a creative block, and sat at home in his London flat bonding with his pet dog and struggling to find the money to pay his cleaner.

Out of the blue he gets a call inviting him to attend the Palchik International Film Festival in the fictional Autonomous Republic of Karastan, which plans to put on a retrospective of his work. Flattered, he is happy to attend and is gradually drawn in by the attention he receives, but things take a change of direction when the country’s head, President Aleluyev (Richard van Weyden), asks Forester to direct a film about the medieval hero Karanstani, founder of the country, with drunken star Xan Butler (Noah Taylor) already on-board to star.

What follows is a dark comedy of errors with Forester shepherded to remote locations by wrangler Ruslan (Lasha Ramishvili) – where locals are ‘encouraged’ by soldiers – to take on roles and seduced by dark-haired beauty Chulpan (an excellent MyAnna Buring), whose relationship with Aleluyev and general politics of the region leave Forester confused and bemused. This is when the film is at its strongest as Forester tries to create a film in a language he doesn’t understand; against a political backdrop he has no idea about and with a mixed bag of cast and technicians.

Needless to say it doesn’t end cleanly especially as Forester comes to realise he is being manipulated by all around him. A coda set a year later – with him now working in a hardware store – adds an amusing final twist. The tone of Lost In Karastan is uneven at times with Hopkins struggling to layer in the right amount of humour set against the story, but Matthew Macfadyen convinces as a man increasingly out of his depth while MyAnna Buring – of whom the film could have done with more of – is charismatic and suitably enigmatic as a women who always knows more then she ever lets on.