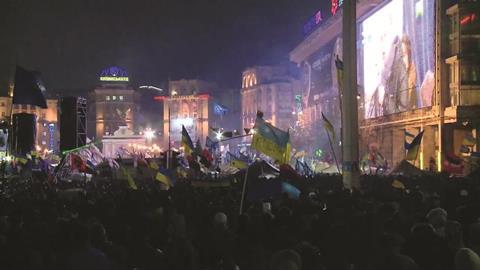 When the Maidan Square protests broke out in late November 2013, in protest against the widespread corruption and the pro-Russian, anti-EU stance of former president Viktor Yanukovych and his government, Ukrainian director Sergei Loznitsa followed events closely. He soon decided that he needed to chronicle the history that was unfolding in the square, and from mid-December up to and including the violent denouement of these ‘Euromaidan’ demonstrations towards the end of February 2014, he was there with a camera crew, among the protestors and, when things turned sour, in the thick of the action.

But Maidan is less breathlessly immersed in the melee than one might expect from the subject matter. Loznitsa and his crew filmed events inside the square and in the protestors’ HQ from a series of fixed camera angles, leaving the camera running so that we get a series of long, busy tableaux of the Euromaidan movement, in which we have time to observe characters, details and interactions, as if scanning a painting. There’s no voiceover narration: all we are given are a handful of sparing intertitles that explain the basic fact and chronology of the protest. The result is a strong, slow-build documentary that should delight distributors more than TV networks, especially if the director trims a few more minutes off the running time.

Loznitsa has used this fixed-cam approach before in the documentaries he made before My Joy (2010) launched his parallel career as a features director. But here it acquires a particular potency, as these are events we’ve all seen on our TV screens, viewed from an entirely different, more observational perspective (which includes in its purview many of those correspondents and cameramen responsible for the news view of Euromaidan).

The film opens on a crowd singing the Ukrainian national anthem, then charts the community spirit of the early days of the protest in a series of fixed shots, some lasting several minutes, filmed both in the square and in what appears to be the Kiev City Council building – which was occupied and turned into the protestors’ central HQ. The mood appears peaceful, constructive and even festive, especially with the approach of Christmas. Canteens and food stalls are manned by volunteers, and barricades go up in a climate of quiet industry.

We hear speeches and music, including a priceless anti-Yanukovich parody of Italian partisan song Bella Ciao, but the sources are mostly off-screen. Loznitsa is more interested in the ordinary protestors than those who are haranguing them. Small human dramas (or comedies) unfold within the frame, as when a potato-peeling volunteer has his mobile phone confiscated because it’s distracting him from his work.

It’s almost an hour in, with a shot showing a line of ambulances, when the mood changes. Helmets and gasmasks begin to appear, and the demonstrators pass broken-up bits of pavement from hand to hand for use as weapons. Soon the director’s impassive camera eye is depicting mayhem as protestors surge this way and that, throwing stones, choking on tear gas. A few of the sequences in this darker second part of the film are masterful pieces of cinema that should be required viewing for any director wanting to understand how rioters move and behave (it’s mostly not the way we’ve seen it in the movies).

Only twice is the camera forced to abandon its post: once to avoid being hit by a stone or missile, and the second time when it swivels to document the fact that the police are firing on protestors. But even in the midst of the moltovs, Loznitsa’s sincere and memorable document retains its fascination with those small details that make us human, and make democracy worth fighting for.