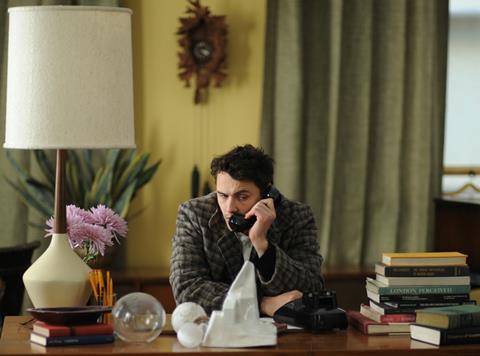 New York-based director Carter teams up with James Franco again after 2009’s Erased James Franco, in which the star re-enacted scenes from his own films and others including Julianne Moore’s part in Safe. Role-playing and the fragmented, moment-by-moment nature of identity are again at the fore in Maladies, along with the question of how we define madness. As the fatherly narrator (a voice Franco’s character hears in his head) tells us in the opening sequence: “This is the story about an actor who’s no longer acting.”

Maladies shows some amusing glimmers when trying less hard to be artsy.

Despite its big-name cast (Catherine Keener is on impressive form), most viewers will find it an impossibly pretentious, drifting picture that, while brimful of pseudo-philosophising, lacks substance where it matters.

The glossily lensed, ’60s-set film plays out mostly in a sprawling, wood-paneled house near New York and on the beachfront it overlooks. It charts the relationship of its three inhabitants: mentally unstable James (Franco), who used to act on a TV soap but now is trying to finish a novel and has fits of panic that can only be soothed by the sound of a telephone dial-tone; his friend Catherine (Keener), a painter who likes to cross-dress in men’s suits and penciled-on moustache; and his sister Patricia (Fallon Goodson), a morose, raven-haired eccentric who barely talks and has just taken up smoking. Genial neighbour Delmar (David Strathairn), referred to affectionately as their “aunt”, is a regular visitor.

Separated into sections by oblique titles such as “Things at one point don’t exist - and then they do”, this is an episodic film in which not much happens in the conventional sense. The kookiness of these “creative lives” and their out-there antics feels laboriously contrived, their musings on epistemology and semantics laughably affected.

As James - who breaks mirrors, freaks out in pharmacies, and covers himself in shaving foam - reflects on his trouble getting from the kitchen to the living room because the nature of hallways throws him off, and on the “sketchy quality” of using pencils, we doubt his literary efforts will have deep insight, so his pact with Catherine that should either die the other will finish their work (her Rorschach-style ink paintings are no masterpieces either) lacks the emotional resonance that’s meant to form the film’s heart. Maladies shows some amusing glimmers when trying less hard to be artsy - an outing to a diner in which Catherine, in drag, confronts shocked and disapproving fellow customers is a scene which, while hardly original, is one of the more effective.

After James on one of his soul-searching, photograph-taking walks happens upon an old, elegant blind woman in fur-collared coat reading braille on a seaside bench in the snow, he decides to learn the raised-dot system himself and use it to finish his novel, in the hope it will help him “see things differently”. Perceiving profundity in this film is a tough ask - no matter how you look at it.